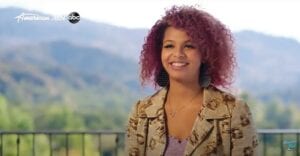 When 18-year-old Alyssa Wray auditioned in this past Sunday’s episode of ABC-TV’s “American Idol,” she impressed the show’s three judges to the point that one of them, Lionel Richie, was reduced to tears after hearing her perform Jennifer Hudson’s song, “I Am Changing.” Miss Ray is a resident of Perryville, Kentucky.

I have never been a fan of “America’s Got Talent,” mostly because I don’t like watching card tricks and socalled magic tricks and I’ve seen very little in the way of talent during the few times I’ve tuned into that show.

Nor have I seen anything, before the current season, to idolize on “American Idol.” Normally, I’d much rather be reading a book. I do confess to being hopelessly addicted to “The Voice” and even record it if there’s a chance I won’t be close to a TV if a singer shows up that I would like to hear again.Th

I’m also addicted to playing along with “The Voice “app on an Android computer tablet even though I’ve come within several hundred thousand points of winning the game.II have, however, on the app, chosen the winner more than 75 percent of the time. So take that, Blake Shelton.

In the meantime, just in case you haven’t already heard it in the news, “American Idol” has now become well worth watching, at least for us, because three of the contestants live within a few miles of our place and we are actually acquainted with the parents and grandparents of one of them.

Seventeen-year-old country musician, (and I do mean COUNTRY) Alex Miller actually went to grade school at Paint Lick Elementary and still lives in Lancaster. He was featured on this year’s season premiere and subsequently advanced to the next round of competition.

Last Sunday night , 18-year-old pop musician Alyssa Wray from nearby Perryville also gave a WOW-worthy performance that blew off the judges’ socks. Alyssa also advanced to the next round.

Finally, 29-year-old Mount Vernon resident Courtney Arnold does not yet know when her audition will air but she has been assured that it will. Courtney has been performing country and bluegrass music at Renfro Valley for the last eight years and I have high hopes that she will also make the first cut of contenders.

In the meantime, it’s now three minutes until 8 p.m. on this spring-like Monday evening and “The Voice” will be on before I stop at the necessary on my way to the TV.The column is already way past late and now it’s going to be later.

Now it’s 10:30 and too late to make much difference. If I’d known 2-1/2 hours ago how pitiful tonight’s episode of “ The Voice” was going to be, I would finish what I started even though I did rack up several thousand points in the play-along.

The column is going to be short, if not sweet, because I have to get to bed to hopefully get some sleep, even though the likelihood of that is slim to none. I’m scheduled for another round of pre-op procedures at Markey before I undergo major cancer surgery on the 19th.

I’m trying not to worry about it but I’m not having any luck. Your prayers that can get this 16-months and counting ordeal put behind me will be much appreciated.