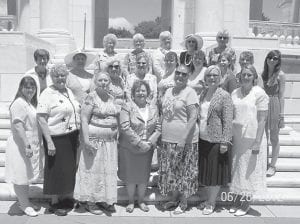 — Marsha Banks, a member of the Pine Mountain Chapter of the Daughters of the American Revolution, attended the DAR’s Continental Congress in Washington, D.C. This photograph was taken at Arlington National Cemetery, where the Kentucky delegation placed a wreath at the Tomb of the Unknown Soldiers. During the same ceremony, an Honor Flight from Florida also laid a wreath. DAR helps sponsor Honor Flights to take World War II veterans to Washington to view the World War II memorial along with other national sights. Pictured along with Marsha Banks are members of the Kentucky delegation.