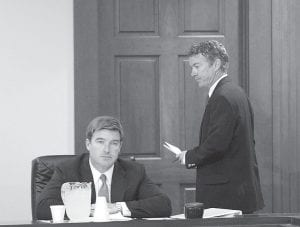 Paul’s campaign said in a statement this week that he believes in “maximum control by Kentuckians over this process, rather than dictates from Washington, but will work with all concerned for the best outcomes.”

After speaking to tea party backers in Campbellsville, Paul said his campaign has focused on the deficit and health care but added, “We should do everything we can to try to stop the plague of addiction.”

Last week, libertarian-leaning Paul suggested that eastern Kentucky voters are more concerned about fiscal and social issues than with the illegal drug issue.

The drug issue is sensitive in eastern Kentucky, a crucial battleground in the Senate race and a hotbed for marijuana growers and drug dealers selling prescription pills and methamphetamines.

“The diff erence between where I am and where Rand Paul apparently is on this particular issue is so stark, and his policies would actually hurt the people of Kentucky,” Conway said.

Conway, the state’s attorney general, created a task force to coordinate efforts to curb prescription pill trafficking. Last year, that task force was part of the largest prescription pill crackdown in state history, resulting in charges against more than 500 people linked to a drug pipeline between Florida and Kentucky.

“We would not be able to keep up with the drug crime without this assistance,” he said.

Paul did not respond to the FOP’s questionnaire and skipped the group’s candidate forum on Saturday, Jones said.

Paul’s campaign said he would continue to seek votes from law enforcement officers across the state.

In an appearance in Hindman on Saturday, Paul never Conway in his speech at a coal appreciation event, instead reserving his attacks for President Obama, House Speaker Nancy Pelosi and federal environmental regulators. Paul claimed Obama “cares nothing about Kentucky and cares even less about Kentucky coal.”

“We have a president who is forcing the EPA down our throats,” Paul said. “Even without changing the rules, the EPA is stifling the permit process and people (are) out of work here because of the president and his policies.

“With all due respect, Mr. President, you’re wrong and you need to stay out of Kentucky affairs. And you need to keep the EPA out of our affairs because we need jobs, and we’re not going to get jobs with a busybody EPA that’s in our way.”

Paul made overtures to coal operators by proclaiming himself a coal ally who would “defend your way of life.” The Bowling Green eye doctor has come under attack from members of the United Mine Workers who recently said they were alarmed by Paul’s suggestions in a magazine interview that elected officials in Washington shouldn’t be setting coal mining rules.

After his speech, Paul said all levels of government have a role in regulating the coal industry, adding that his preference generally is for “more local over federal” oversight.

Paul suggested the need for a broad review of coal regulations to determine what’s working.

Conway has won the UMW’s endorsement in the race to succeed Republican Sen. Jim Bunning, who is retiring after two terms.

Conway spokesman John Collins said the Democratic candidate would be a strong defender of the coal sector because it creates good-paying jobs, attracts industry and fosters low electricity rates.

“That’s why he opposes any and all cap and trade legislation, which unfairly punishes coal states like Kentucky and raises utility rates,” Collins said.

Paul has accused Conway of flip-flopping on the so-called “cap and trade” energy plan, which would create economic incentives to limit heat-trapping gases from power plants, vehicles and other sources. Detractors, including Paul, claim the plan would punish the coal industry and raise electricity rates.

“We’re done with that,” Paul said. “I’m not going to answer questions about anonymous accusations.”