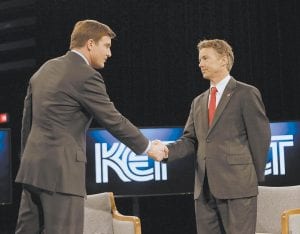 Their final debate lacked the fireworks of a prior exchange when Paul angrily confronted Conway about a TV ad that pointed out accusations that Paul, while a student at Baylor University, was a member of a secret society that mocked Christians. The ad revisited claims by a woman that Paul helped tie her up and told her to worship an idol, and that he told the woman his god was “Aqua Buddha.”

Instead, with just a week left in the bitterly fought campaign, Paul pressed his tea party-backed message of limited government and said Obama’s health care and financial policies will stifle job creation at a time of chronically high unemployment.

“ObamaCare is going to be worse than we can even imagine,” Paul, a Bowling Green eye doctor, said during the nationally televised debate at the studios of Kentucky Educational Television.

Democrat Conway hit back by linking Paul to the Republican’s past statements that discussed the possibility of the deductible and a sales tax to replace the federal income tax. Conway, who supports the health care law, acknowledged it’s not perfect but said he wants to fix it.

He defended the landmark law for providing first-time coverage for some 654,000 of Kentuckians, and said it will keep young adults on their parents’ health plans longer.

The two also sparred over the financial overhaul law pushed by Obama.

Paul said the law is “very dangerous for our economy,” and said it will punish banks in Kentucky with more layers of regulations even though the state’s banks didn’t cause the economic meltdown.

“Leaving them alone in the first place got us in this mess,” he said.

“This election is about which agenda do you want,” Paul said. “Do you want President Obama’s agenda that believes in government as this mode of stimulus?”

The two are vying for the seat of 79-year-old Sen. Jim Bunning, who is retiring after two terms.

As for the ad, Paul has denied being involved in any kidnapping and has called the ad false. The Washington Post reported last week that the woman has since described the incident as a “hazing prank” that Paul should acknowledge.