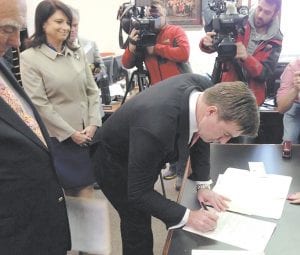 Democratic Attorney General Jack Conway signed the papers for his name to appear on the ballot last week in Frankfort for the May 19th Democratic primary for governor in Kentucky. Conway visited Whitesburg on January 14. (AP Photo/Adam Beam)

Attorney General Jack Conway kicked off his gubernatorial campaign last week with a three-day tour in eastern Kentucky. During his stop in Whitesburg, at Icing on the Cake on Jan. 14, Conway told a group mostly consisting of Letcher County politicians that many of them including Letcher County Judge/ Executive Jim Ward had “been awfully good to me.”

“Jim’s going to be one of a handful of county judges I rely on over the next four or eight years to keep me in tune with what counties need, and particularly the counties in eastern Kentucky,” said Conway.

Conway said it is important that the governor communicate with local officials.

“ The governor needs to know your infrastructure needs, transportation needs, big issues and that’s the type of governor I am going to be,” said Conway.

Ward described Conway as being a good friend who has helped Letcher County.

“When we call to Frankfort, Jack’s there for us,” said Ward. “You can’t say that about everybody down there.”

“She is another one that we depend on a lot and I appreciate all she does for this county and all of these surrounding counties,” said Ward.

Combs explained why she is working each day to get Conway and his running mate State Rep. Sannie Overly elected, instead of running herself.

“Well, I can sit down and tell you it was our decision as the three of us who was going to be on that ballot and I support 100 percent Jack and his running mate Sannie Overly,” said Combs. “And I want you all to know that’s as good as having my name on that ballot. So I want you all to hear that from me. That’s how close I am to this. That’s how involved I am. But here is the real important part, that’s how good a team I think this is.”

Conway described his running mate as smart and cool.

“Sannie came up as an engineer, worked in the transportation cabinet, put herself through law school at night and became a lawyer in the town of Paris in Bourbon County,” said Conway. “Got into the legislature about six years ago, rose very quickly and became the first woman in Kentucky history elected to house leadership.”

Overly and Combs are best friends.

“You can ask me a lot of questions about him, but you can ask me any question about her,” said Combs. “She and I are very close.”

Conway said he wanted to head east after he and Overly officially filed papers with the Secretary of State’s office on Jan. 12.

Conway said Patton ingrained in him how important coal is in eastern Kentucky and throughout the state.

“I was a young lawyer but I actually put pen to paper and wrote out the thin seam tax credits that make it more economic to actually mine the thinner seam coal that is being mined here in Appalachia,” said Conway.

Conway said he would fight for the coal industry and also plan for the future.

“Up there in Washington, they do not get how badly the people of eastern Kentucky and places like Letcher County are hurting,” said Conway. “This region has lost 7,000 jobs just in the last couple of years.”

“ You are looking at probably someone who has fought the drug issue as hard as anyone in Kentucky over the last seven years,” he said. “We have shut down half the state’s pain clinics. I’ve been in front of 45,000 students telling them not to get started in the first place. I travel with parents from eastern Kentucky who have lost their children.”

Said Conway: “For the first time in history, our Public Service Commission allowed a company to come in here and say, ‘You know what, we’re going to shut down the Big Sandy Plant. We’re not even going to really study how much it costs to retrofit it and scrub it and make it clean, because coal can be burned more cleanly now. We’re just going to let this company transfer a plant from West Virginia into the Kentucky system and let you all pay for it.’ Folks, that is wrong. I fought it.”