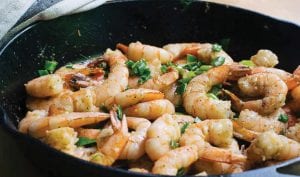 My love affair with cast-iron cookery began when my mother, Angeline, gave me the heavy, black, cast-iron skillet that originally belonged to my grandmother, Willie Mae Davis. What I love most about cooking in my grandmother’s skillet is that it’s a direct connection to my history and heritage. I don’t fry foods very often, but my heirloom skillet is my pan of choice for the task. As I stand there, turning pieces of fish or chicken in the bubbling hot oil, I think about all the other women in my family who have done the same task with this same pan.

In times past, properly seasoned cast iron was the nonstick cookware of its day. It can stand up to high heat and almost any type of utensil without damaging its surface. Cast-iron cookware also leaches small amounts of iron into the food, a benefit for those who have iron deficiencies. Cast iron heats up slowly, so using it requires a little planning, but once it’s hot, it distributes the heat evenly and holds it steady like an oven. Seasoned cast iron doesn’t require oil to sear or blacken meats.

Recently, I received a beautiful, midsized (10-1/4-inch) cast-iron skillet with “love” handles on each side as a gift from Lodge cookware. It’s perfect for serving directly from the stove to the table. I also could use my new pan right away because Lodge pans are already seasoned with a baked-in factory coating of oil.

Seasoning is simply oil baked into the pores of the iron, which prevents rust and provides a natural, easy-release finish that continues to improve with use. Seasoning can refer to both the initial finish of the cookware as well as the ongoing process of maintaining that finish.

Lodge uses a soy-based vegetable oil to season its traditional cast iron and carbonsteel cookware. No synthetic chemicals are added. The oil is highly refined, and all proteins that cause soy-related allergies are eliminated. The oil contains no animal fat, peanut oil or paints.

Here are a few tips for cleaning your cast-iron pans:

1. Wash cast iron by hand with a nylonbristle scrub brush. If needed, use a pan scraper for stuck-on bits.

2. For extra-sticky situations, simmer a little water for 1 minute, then use the scraper after cooled.

3. Dry promptly and thoroughly with a lint-free cloth or paper towel.

4. Rub with a very light layer of cooking oil or Lodge Seasoning Spray, preferably while the cookware is still warm.

5. Hang or store cookware in a dry place.

6. Occasionally, you may notice some dark residue on your towel when cleaning. This is perfectly safe — it’s just the seasoning reacting to foods that may be slightly acidic or alkaline. It will disappear with regular use and care. Soap isn’t necessary, but if you like, a little mild detergent is fine … promise.

7. It’s very important to maintain the seasoning of your cast iron and seasoned steel cookware by applying a very thin layer of oil after each cleaning. This will help keep you cooking for decades.

I gave one of my large, cast-iron Lodge skillets to my daughter, Deanna, which she immediately put to use to pan-sear fish. So, from mother to daughter to granddaughter and great-granddaughter, the cast-iron tradition continues in our family, one fabulous meal at a time. And to think that it all started with a single cast-iron pan from my grandmother, Willie Mae.

This recipe for Black Pepper Shrimp is the perfect dish to prepare in a cast-iron pan.

1. Peel and devein shrimp, leaving the
last shell segment and tailfin intact.
2. Heat the oil in a 9-inch or 10-1/4-inch
Lodge cast-iron skillet over high heat until
very hot, about 3 minutes. Add the ginger
and cook, stirring, until the shreds turn light
brown and caramelize, about 2 minutes. Stir
in the coriander, peppercorns and sweetener, and let heat for 15 seconds.
3. Add shrimp and cook, shaking and
tossing, until they turn pink and curl up,
about 2 minutes.
4. Sprinkle with lime juice, salt and scallion greens. Gently mix together and serve
from the skillet or as a topping for brown
rice or whole-wheat pasta with roasted red
bell peppers.

.
Angela Shelf Medearis is an awardwinning children’s author, culinary historian
and the author of seven cookbooks. Her new
cookbook is “The Kitchen Diva’s Diabetic
Cookbook.” Her website is www.divapro.com.