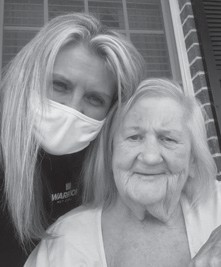 How’s everything in your little corner of the world? Again I will say, I hope you have a pair of long johns handy. I sure believe we may need them. Friday morning I actually turned on the heat to break the chill in the car.

It seems like we have been having fall instead of summer in this part of the Ohio Valley area.

I am so glad that outside music events are once again opened, yet I am also a little leery of the different type of virus that is spreading again.

The Carcassonne Community Center square dance is postponed until September due to the rise in the virus. Yes, it was a huge disappointment. Even though I can’t dance, I enjoy watching enough to drive over 500 miles round trip to attend this event.

The 7 Mile Bluegrass Festival was held at Greenfield, Ohio, which is 100 miles from where I live. I attended last year since Sunrise Ridge was performing there, so I decided to go once more as Sunrise Ridge was on the schedule.

Last year I drove up and back in one day. This year I decided to go hippie camping and sleep in my car, then I couldn’t make up my nimble mind as I had some pressing things going on.

At the last minute, I threw in four sheets to cover the windows, and a pillow just in case I decided to stay. I knew I was small enough to sleep in the back seat for one night, plus I keep two heavy throws in my car all year round.

Well, I will make myself one promise. Yes, I am small and so is the Honda Fit. I will not try to sleep in the back seat again. That is the most uncomfortable night I have ever had in all the years I have been car camping. Now with seats folded down and a cushion, I am very relaxed and comfortable.

It was worth it as the evening slipped into dusk. The temperature cooled off and I finally got a cover.

There were beautiful lights around the stage that changed colors and the music was good, however it always seems the second set is better. I didn’t stay last year to get to hear the house band, 7 Mile Bluegrass Band, featuring Billy Self, who is responsible for the festival. The band was great.

I met Billy personally when I first arrived, not knowing who he was, as we pulled into the same parking area. Believe it or not, I asked a complete stranger for help.

As we exited our vehicles at the same time, we were just a short distance from the large tent for the audience. I asked if he was going that way. He replied yes, so I asked would he please carry my chair as I also had a small bag. I didn’t want to make two trips.

He introduced himself. As it turned out I had talked to him earlier as I called to inquire about the weather. In fact, I was on my way when he returned my call.

I still didn’t know he had the band until much later. He is a very nice person, very down to earth, I came home with his CD and really enjoyed listening to it.

All the bands were good. I went especially to see Sunrise Ridge as Jack Adams plays banjo. Everyone knows how I love Jack and am so proud of him I dearly love Shawn, Whitney, Natalie and Flo, who keeps the band rolling. Oh before I forget it, Flo won the spit the pot jackpot. Flo, I was so pleased for you.

Jack Adams had another commitment with Larry Efaw & Bluegrass Mountaineers. The band was performing in Michigan.

Natalie talked to another banjo picker, Jonathan Keaton. I hope I remember the name correctly. Jonathan sure deserves a lot of praise and a bushel of thanks as he not only performed with his regular band, he picked with six bands straight in a row. Each band did two sets.

I wish I knew his address. I would send him a thank you card. He did a terrific job. You must remember each band plays different music. Jonathan was absolutely wonderful each time. Yes, I missed Jack and his claw hammer banjo picking

The only thing I will complain about bluegrass festivals any more, there’s an old saying about something going to the dogs! Well, I am finding out the dogs are going to the bluegrass festivals. If you can’t leave home without your pet, and it is as big as a pony, keep it away from me as I don’t want it slobbering on me, or sniffing in my bag in which I carry essentials to keep my blood sugar from dropping.

A man had a huge dog, that was on a long lease, and here that stinking thing came towards me. I kept saying get, and the man kept talking, not paying any attention. The dog came so close, and he started to get close to my bag hanging on my chair.

I took the tip of my cane and tapped it on his nose. The man asked, Did you just tap my dog?” I replied, “Yes I did. I will do it again if you don’t get it away from me.”

Someone informed me he was the owner of the ground the festival was on, as if I cared. I replied I didn’t care who he was. If he said to leave, I would tell him where he could go, get in my car and leave.

As if that wasn’t enough, a couple decided to sit right directly in front of me with a dog that looked like a small pony. I have never seen such a huge dog, again on a long leash. It was almost 90 degrees and the dog was slobbering. I literally thought I was going to upchuck. Had I could have managed to move all my stuff, I would have gladly got away.

The tents were full and the sun was coming in, so I found a nice shade by the sound tent. The man was sitting in an old cloth bottom chair, which broke under his weight. Of all times I had turned my head and missed this. I turned around in time to see him picking up the chair, then throwing a cover on the ground. Someone from the staff informed him that the tent across the way had bales of straw if he would like to sit there, so the remainder of the festival was wonderful.

I have to admit, had I seen him hit the ground when the chair broke, I would have laughed so hard I probably would have gotten more than I could have handled. At least I wasn’t aggravated anymore and really enjoyed the rest of the night.

Saturday morning, I left as quick as it was daylight for the return trip home. I had something to attend to.

The Osborne Bros. Festival will be held Aug. 4-7. Larry Efaw & Bluegrass Mountaineers and Sunrise Ridge will feature Jack Adams in both sets.

In 2019 I missed this event due to my accident June 1. Larry Efaw hired Jack instantly. In July I removed my boot long enough to drive the Honda so I could buy a car especially as I intended to go to Hyden.

I called Dean Osborne to get a ticket, as I had been there in 2018. Dean advised me not to try it. I listened to him and let common sense take over instead of my heart, which I have regretted ever since as last year it was cancelled due to the virus.

With things the way they are at the present, who knows? Only time will tell.

I have gotten modernized, as I bought a Garmin GPS. When I took it out of the box, which had no instructions, I tried to fool with it to no avail. I had asked someone if she would help me. Of course she said yes, but when I called to ask if she could help me, she replied, couldn’t Keith help me?

Keith was up to his head working on his truck, I replied. I would send it back. Keith did take the time to set it. Actually he showed me and, yes, I can do it.

I should have known better to ask this person. I won’t make the mistake again. With friends like this I don’t have to worry about enemies. I am actually finding out at this late stage, you really think someone is your friend, but you can be mistaken.

My personal world has been turned upside down, and like a merry-go-round, as it goes round and around. I haven’t mentioned too much due to the privacy of the families.

Saturday morning, I left as quick as it was daylight for the return trip home, as I had a funeral to attend. A friend that I had known 48 years, Minnie Estes Theilman, died two weeks ago. Her memorial was held at Arlington Mausoleum Memorial Gardens.

This was a new experience for me. After leaving the main road, directions were scare as no one seemed to know what the heck they were doing. I was given directions to the wrong place, but finally I did get there.

I hadn’t seen Minnie’s family since they were young, as Minnie and my life had taken different paths.

Johnny and Ann Calihan’s daughter Carol Calihan Dieckman died after fighting a long, tiring battle. She has been in and out of a hospital and nursing home every few days since March.

I won’t go into details. For one thing, I can’t type and cry at the same time. Maybe later I will be able to say more.

Carol’s sisters Sue Wagner and Teresa Payne were so wonderful being there for Carol till the last minute.

Needless to say, I am heartbroken for the Calihan family. I love them so much.

Sunday, an elaborate baby shower was held for my granddaughter Jodi Gray Davidson. I wasn’t able to attend. I am sure I wasn’t missed as she had so many people there. I don’t belong in an elite crowd like that anyway.

Sunday was Old Time Fiddlers. A few of our musician members had previous plans, so I was afraid we wouldn’t have very many. Was I in for a wonderful surprise.

We had 10 musicians, and a new man stopped in. His name is Ed. Later I found out he especially stopped to see Jeff Campbell; they hadn’t seen each other in 40 years.

I never thought I would see Marvin Davis and Dale Farmer coming to Old Time Fiddlers, Thanks, everyone, for helping and making this dream a reality for me.

Hello Tommy Tindle. I know you are related, having your sister Price Rogan visit you. I hear you got a haircut, so now you will be all spiffy when and if I get to come to visit. Hello Buddy & Bernice Grubb. Please keep the Grubbs and Calihan families in your prayers.

Hello Mike Grubb. I sure could use all those hugs you owe me.

Mike and Marcia Caudill. I sure would like a roasted marshmallow about now.