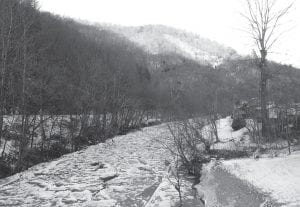 AccuWeather reports that another arctic blast is on the way, including a glancing blow from the polar vortex.

“We will likely see a piece of the polar vortex break off and set up just north of the Great Lakes spanning Jan. 16 to 20,” AccuWeather’s Lead Long-Range Forecaster Paul Pastelok stated.

“This next main arctic blast will not rival, nor will be as extensive as the event last week,” Pastelok said.

This time, it appears the low temperature reading for Letcher County will be 18 degrees on Friday night, which is nowhere near the below-zero weather of early last week that froze the North Fork of the Kentucky River, as seen in this photo taken at Blackey on January 7.