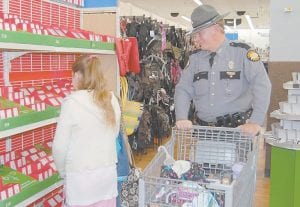 Each December Kentucky State Police troopers set aside one day to help make the holiday season brighter for children in the community and to show them that police have a softer side.

This year 76 children from Letcher, Knott, Leslie, Perry and Breathitt counties scurried all over the Whitesburg Wal-Mart on December 11 looking for toys, clothes and electronics worthy enough for their shopping carts.

Each child was allotted $125 during the “Shop with a Cop” program.

“It allows us to mingle with these kids and let them know we as police care for them,” said Tony Watts, public affairs office for KSP Post 13 in Hazard. “If they need help we are here for them and want to be their friend.”

Watts said children often see police in “not such a good matter” and may not get a positive image from police.

“We want them to realize we are good people,” said Watts.

KSP Trooper Jackie Pickrell said the Shop with a Cop program gives children a chance to have a positive experience with law enforcement.

“I think it gives them a chance to see that we are human and do care,” said Pickrell.

Pickrell said the event is so important to some troopers that at least one trooper was at Wal- Mart helping children pick out items even though he had worked until 4 a.m. that morning.

Carl Franklin, sporting goods department manager for Whitesburg Wal-Mart, said most of the Whitesburg employees who help police keep track of how much each child has left to spend took the day off from work and volunteered their time.

KSP Trooper David Combs said the shopping trip is the most fun he has all year and said it wouldn’t be possible without public donations and the Whitesburg Wal-Mart.

Franklin said he and other Wal-Mart employees also look forward to Shop with a Cop.

“This is what all of us look forward to — making sure kids have a good Christmas,” said Franklin.