Cops call for help with ‘shoppers’ 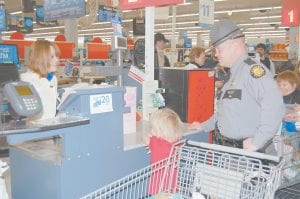 SHOPPING WITH A COP — Kentucky State Police Trooper Adam Hall looked on as cashier Kayla Taylor placed a little girl’s new toys into bags during the Shop with a Cop event at the Whitesburg Walmart.

Participation in the “Shop with a Cop” charity conducted by the Kentucky State Police was so great this year that local school and county officials were called in to help.

“We had so many kids that we needed extra help, plus they wanted to help,” said KSP Public Affairs Officer Tony Watts. “This is a special time and everyone wants to be a part of it and we are glad

Watts said every KSP trooper from Post 13 in Hazard along with several dispatchers were at the Whitesburg Walmart on Dec. 9 to help 87 children from Letcher, Knott, Leslie, Perry and Breathitt counties look for toys, clothes and electronics worthy enough for their shopping carts.

Each child was allotted $125 during the “Shop with a Cop” program.

Because the number of children who were able to pick out items grew by 11 this year, more help was needed.

“It was the best time we have had at Christmas ever,” said Whitaker.

Whitaker was amazed at how appreciative the child was that she shopped with last week. She said he wore his new clothes to school the next day.

“He was so appreciative and thankful for everything,” said Whitaker. “He was so sweet.”

Letcher County Deputy Judge Eddie Meade was also surprised by how grateful the children were that people took time from their busy schedules to take them shopping.

“The ones I had thanked you,” said Meade. “That was their Christmas. You could tell that is probably what they got. That was it right there.”

Whitaker said another child to buy gifts for his siblings.

“He bought for everybody in his family,” said Whitaker. “He got him clothes but he bought toys for all his brothers and sisters. That’s what he wanted to do with it.”

KSP troopers see the shopping trip as an attempt to make the holiday season brighter for children in the community and to show them that police have a softer side.

“Usually when we encounter kids like this it is not in a pleasant matter,” said Watts. “It really makes a difference to let these kids know that we are human too.”

“It helps the kids’ relationship with the police officers,” said Whitaker. “It gives them a positive experience. It’s a good thing. Maybe they won’t be afraid to talk to them if they see that they are doing good things.”

“He was frightened to death of them,” said Winston Meade. “I leaned on my knees and told him that police are there to help him.”

KSP Trooper Randy Surber said the “Shop with a Cop” program does change the way children look at police.

“Most of these kids that we pick up are scared when we first see them but then they warm up to us,” said Surber. “Instead of a bad guy image we have a good guy image for the rest of the day.”

KSP Det. Charles Bledsoe said this is the time to make children happy.

“The looks on their faces is worth all of it,” said Bledsoe.