Cops: Drugs had part in wreck 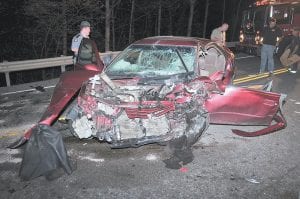 A badly damaged Toyota Camry sat on U.S. 119 at Payne Gap on October 1 after a serious accident resulted in two people being airlifted to Tennessee hospitals for treatment. Letcher County Sheriff ’s Deputy Brian Damron said he believes drug use by the Camry’s driver, Crystal Barlow, caused the wreck which left Barlow, of Isom, and Teddy Thompson, of Burdine, seriously injured. (Photo by Chris Anderson)

A weekend wreck near Jenkins left two people with severe injuries. Police say they believe drugs were a factor in causing the mishap.

Letcher County Sheriff ’s Deputy Brian Damron said he expects to file assault and wanton endangerment charges against an Isom woman he believes was under the influence of drugs at the time of the Friday night wreck which injured two people.

“It’s unfortunate to say, but I believe had drugs not been a factor in this wreck, I believe the accident could’ve been avoided,” Damron said Monday.

The wreck occurred at about 6:30 p.m.on Friday near the entrance to Fishpond Lake on U.S. 119. Damron said a Toyota Camry being driven toward Jenkins by Crystal Barlow appears to have crossed into the path of a Chevrolet Blazer being driven south by Ted Thompson of Burdine.

The vehicles collided on the drivers’ sides. Damron said Thompson was ejected from his vehicle, which rolled over a guardrail and came to rest on a hillside. 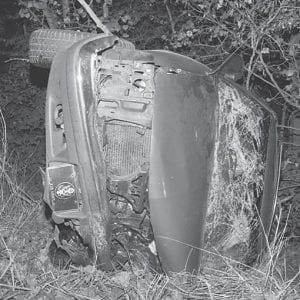 This Chevrolet Blazer driven by Ted Thompson lay on its side after a collision with a Toyota Camry driven by Crystal Barlow of Isom. Letcher County Sheriff ’s Deputy Brian Damron said he believes drug use by Barlow had a role in causing the wreck on Friday night. Both Thompson and Barlow were airlifted from the scene and taken to hospitals in Tennessee for treatment of their injuries. (Photo by Chris Anderson)

Thompson and Barlow were the only occupants in their vehicles. Both were airlifted from the scene to hospitals in Tennessee. Damron said Thompson was listed in critical condition. Information on Barlow’s condition was not available at presstime.

Damron said he believes drugs contributed to Barlow colliding with Thompson, and that assault and felony wanton endangerment charges likely will be filed against her.

Damron said the quick response time by emergency crews likely prevented a death in the wreck.