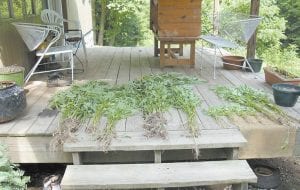 Lt. Brian Damron said pot plants ranging in size from six-inches to six-feet tall were found growing around edges of the tree line at the home of Michael Honeycutt, 33, of Gazelle Drive.

Damron said the majority of the marijuana plants found were female plants with a total estimated street value of about $250,000.

Damron said prescription painkillers hydrocodone and oxycodone, along with––– some marijuana that already been processed, were also found inside the residence.

Sheriff Danny Webb assisted in the investigation of which Damron has charge. Damron cautioned that people who find marijuana plants growing leave them alone because the fields in which they are growing could contain booby traps. Damron asked that anyone with information about the cultivation of marijuana call the sheriff ’s department at 633-2293 or Kentucky State Police at (606) 435-6069.