Cops look for inmate who ran after elevator broke 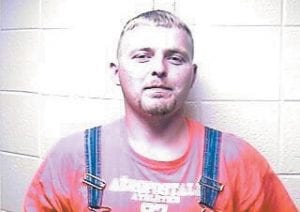 Police are still looking for an inmate who escaped from the Letcher County Jail Saturday evening after an elevator malfunctioned.

Letcher County Jailer Don McCall said one of seven inmates riding in an elevator with a deputy jailer around 5:30 p.m. on July 7 figured out a way to push a button and open the elevator door on the main floor near the district courtroom.

Byron Ellis Bentley, 33, of 124 Brickyard Hill, Jenkins, fled out the elevator, through district court and out the main entrance of the Letcher County Courthouse onto Main Street in downtown Whitesburg. McCall said Bentley took off his orange shirt issued by the jail as he ran through the courthouse.

The elevator is designed so that the control room operator located in the jail is the only person who can open the elevator door.

“This has never been an issue,” said McCall.

An elevator technician worked on the elevator Monday.

McCall said Bentley had tampered with a monitoring device while he was on home incarceration.

An indictment against Bentley was returned by a Letcher County Grand Jury in June. He was charged with kidnapping, assault, criminal mischief and being a persistent felony offender. The grand jury says Bentley restrained Dreama K. Maggard, injured her and damaged her automobile on March 30.

In 2007, Bentley was one of four people indicted on charges of fraudulently using a credit card belonging to Standard Laboratory of Mayking to buy hundreds of dollars worth of diesel fuel.

Several police agencies are working to locate Bentley. In search of leads, Mc- Call said police are looking through jail visitation logs and recorded phone calls. A warrant has been issued for Bentley’s arrest.

Anyone with information about Bentley’s whereabouts should call the Letcher County Sheriff ’s Department at 606-633- 2293.