Police are looking for the owners of this stolen property (pictured above and below) found recently in the McPeeks Branch area of Letcher County.

Police are asking for the public’s help in identifying the owners of stolen property found recently in the McPeeks Branch area of Letcher County.

Letcher County and Wise County sheriff ’s departments recovered a 14-foot pull trailer, a backhoe, hand tools, a firearm and other items estimated to be worth a total of $60,000.

The trailer, some tools and other items have specifi c markings, said Lt. Brian Damron of the Letcher County Sheriff ’s Department.

The backhoe has been returned to the owner who lives in Virginia.

Damron said at least three arrests will be made in this case. Evidence will be presented to the Letcher County Grand Jury. 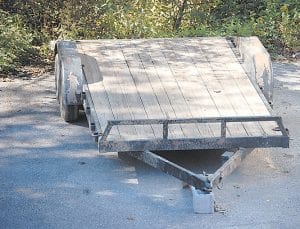