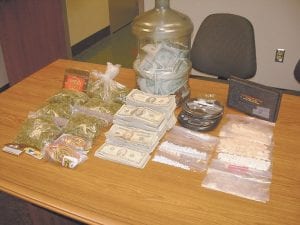 The photo above shows marijuana and prescription drugs seized from a Kingsport, Tenn., man on Dec. 23. The drugs were found after a Letcher County man told police that similar drugs (seen in photo at right) found in a safe in a Burdine apartment were purchased from the Tennessee man.

The Letcher County Sheriff ’s Department arrested a Tennessee man after more than 700 pain pills, marijuana and cash were seized at a Burdine apartment.

Lt. Brian Damron said the arrest was the result of a month-long investigation was conducted after the sheriff ’s office received several complaints that Maggard was selling controlled substances in the county. Damron said the arrest was made Dec. 21 after he and Kentucky State Police Trooper Brandon Thomas went to the apartment in the Mountain Breeze complex to conduct a “knock and talk.” Damron said Maggard showed the officers a safe containing 89 tablets of the painkiller OxyContin, 43 tablets of the painkiller Percocet, and 95 tablets of the painkiller hydrocodone. Also being stored in the safe were 280 white tablets and 87 yellow tablets (all two-milligram strength) of the anti-anxiety medicine Alprazolam, which is sold under the brand name Xanax. Four half-tablets of twomilligram Alprazolam were also confiscated, along with 102 blue tablets of one-milligram strength Alprazolam and 11 tablets of the anti-addiction medication Subutex. The safe also contained $3,080 in cash, four ounces of marijuana and scales. 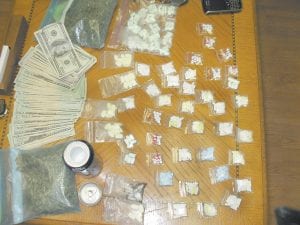 Damron said after Maggard was arrested he told an officer with the Appalachian High Intensity Drug Trafficking Area task force he had been getting the drugs in Tennessee. Based on the information Maggard gave them, members of the HIDTA task force in Tennessee and Kentucky State Police Drug Enforcement Special Investigation-East executed a federal search warrant on the home of the man who Maggard said supplied his drugs.

During the search of that home near Kingsport, Tenn., on Dec. 23, police found more than 2,000 pills, a pound and a half of marijuana and about $3,000 in cash. Police did not name the suspect they arrested in Tennessee, because the case is linked to another drug-related investigation in Texas.

Damron said Maggard was traveling to Tennessee and spending about $600 a week on pain pills and bringing the pills back to Letcher County to sell.

Damron said several people were selling drugs for Maggard here and that information from the case will be presented to the Letcher County Grand Jury.

Damron has charge of the Letcher County investigation. The Tennessee probe is being handled by a HIDTA detective there.