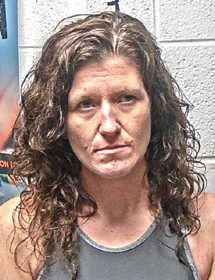 An Elk Creek woman was charged with possessing heroin after a deputy sheriff received a direct phone call about a vehicle parked near the Blackey Post Office Saturday night.

Heroin has been rare in Letcher County in the past, however Sheriff Mickey Stines said it is becoming more common to find it here. Heroin, a natural opioid derived from poppy plants, is cheap and provides an intense high, making it popular among people with addiction to opioids.

Letcher County Deputy Sheriff James Norris charged Evey A. Jent, 34, of 1183 HWY 1108, with first-degree possession of a controlled substance, no or expired license plate and failure of non-owner to maintain insurance.

Norris wrote in the citation that the green Ford pickup was parked in an area where he had received multiple reports of drug activity. Norris said he found Jent sitting in a green 1998 Ford F – 1 5 0 pickup truck with e xpi red tags, he asked her to step out of the truck. Jent said when he asked about drugs, she told him there was heroin in the truck.

Norris said he found a plastic container in the truck with a brown substance believed to be heroin.