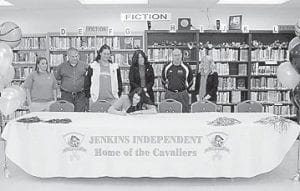 Sarah Corbett, a 5’9” senior at Jenkins High School, signed her letter of intent to play basketball with Pikeville College on Friday afternoon. Corbett averaged six points and 10 rebounds per game. She also had two blocked shots and two steals per game, helping her team to a 12-13 record this season.

“We think Sarah has a nice future ahead of her,” said Pikeville College Coach Bill Watson. “We like her demeanor and what she brings to the table both as a student and an athlete. We’re excited to add Sarah to our family at Pikeville College.”

For her career, Corbett has surpassed 750 rebounds and 100 blocked shots and holds the school record for pulling down 16 offensive rebounds in a single game.

She is the daughter of Karen and Rick Cornett of Jenkins.