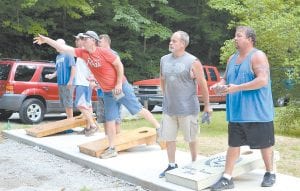 He built it, they came.

They come on Friday nights and Sunday evenings, to see who can toss a 6-inch square bag of corn 27 feet into a 6-inch round hole in a 2-foot-by-4-foot board.

That’s right. Campbell’s his name. Cornhole is his game.

Think of it as horseshoes without the clink.

Cornhole is normally a game of backyard barbecues and family reunion, played on whatever place someone can take nine big steps to measure out the distance between boards, but Campbell’s cornhole court is not the normal game.

There’s grass alright. It separates two long, concrete pads built to fit official size cornhole boards. They’re complete with scoreboards, and a white board where brackets can be drawn so players can keep track of who they’ll play next. 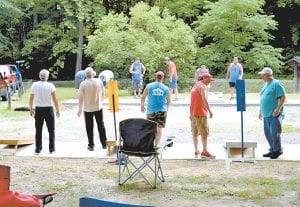 CORNHOLE IS THEIR GAME – In photo at top of page, Frank Campbell (in red) tosses his corn bag toward the other goal as Matt Caudill and Brad Collie wait their turns. Campbell built a cornhole court at Crases Branch that attracts players from all over the area. The entire court is seen in the bottom photo. (Photos by Ron Brunty)

Campbell decided to build the cornhole court at the little park at the forks of Crases Branch after seeing how many people were coming there to play last summer.

“ We started playing down there last year,” he said. “Heck fire, we’d wind up with 40 people here sometimes.”

They played on grass then, just like people all over the South do at family reunions or pretty much anywhere else but Crases Branch.

But something was missing, so Campbell enlisted a neighbor with a small skid loader to level the court. Then another player helped pour concrete and build the equipment shack. Finally, Campbell ordered scoreboards for each set of boards. By this spring, the regulation cornhole court was built, and the players started to come.

“We play on Fridays and Sundays in the summertime, from 5 or 6 o’clock to clear dark,” he said.

Campbell, who retired from the Kentucky Department for Fish and Wildlife Resources, said he built the court just to have something to do.

“I could waste my money other ways,” he said.

He laughs off a suggestion that he’s training the next U.S. Olympic Cornhole Team, but like Crases Branch, the rest of the country is in love with cornhole. According to the web site cornholeworldwide.com, the game originated in Germany in the 1300s, and was pretty much confined to the American Midwest until about 15 years ago, when it began spreading like kudzu across the South and then the rest of the country. ESPN has even covered the American Cornhole Organization’s World Championships of Cornhole.

“Hopefully we can have a big Kentucky-Tennessee face-off,” Campbell said.