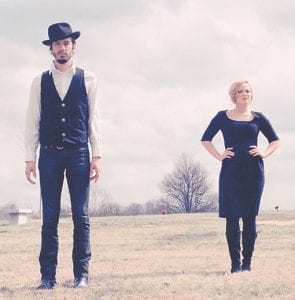 Cory Chisel been called one of America’s best new musicians by Rolling Stone magazine. He has appeared on NBC-TV’s Late Night With Jimmy Fallon, performed at Carnegie Hall’s Zankel Theater in New York City, and had one of his songs chosen for an episode of Fox’s hit show “House.” Chisel’s first full-length album, Little Bird, features performances by Cheap Trick guitarist Rick Nielsen and drummer Bun E. Carlos, both fans of Chisel. His second album, Death Won’t Send a Letter, includes contributions from members of The Raconteurs, My Morning Jacket and Dead Weather.

On Friday, Chisel, a 28-year-old singer-songwriter whose no-frills style reminds listeners of Bruce Springsteen, Tom Petty, Elvis Costello and Ryan Adams, will perform in Whitesburg at Summit City with his band the Wandering Sons. Opening the show will be Velvet Truckstop from Asheville, N.C.

Like many artists before him, Chisel, from Appleton, Wisconsin, became interested in music after hearing hymns being sung in church.

In an upbringing where he was largely sheltered from pop music, Chisel learned music from playing it with his family — for as long as he can remember. One of his grandfathers had nine brothers and, Chisel notes, “they’re all great guitar players, and half of them play harmonica too.” Chisel also cites as an influence his Uncle Roger, a blues musician whose epic record collection exposed him to Howlin’ Wolf, Sonny Boy Williamson, Sam Cooke, Aretha Franklin, Otis Redding, Robert Johnson, Johnny Cash, Tom Waits, Bob Dylan and countless others.

“He was a musical force,” says Chisel. “I always felt like I possessed something similar, that I understood the exorcism I saw him receiving through music.”

Death Won’t Send A Letter, released in late 2009 by RCA subsidiary Black Seal Records, was produced by Grammy- winner Joe Chiccarelli, who is known for his work with The Shins and The White Stripes. The songs on the album were recorded primarily at Blackbird Studios in Nashville, Tenn., with Chisel’s backing vocalist/ keyboard player Adriel Harris and “Little Jack” Lawrence of The Raconteurs and The Dead Weather on initial tracking. Chisel, Harris and Lawrence were then joined by Lawrence’s longtime collaborator Patrick Keeler of The Raconteurs and The Greenhornes on drums. Also appearing on the album is Raconteurs member Brendan Benson, who helped Chisel write and arrange the lead album track “Born Again.” Carl Broemel from My Morning Jacket also contributes to the album on guitar.

While Chisel has played venues much larger than Summit City and is scheduled to perform at the Bonnaroo Music and Arts Festival in Manchester, Tenn., next month, he told The Scene newspaper in Wisconsin recently that loves the challenge of playing to smaller audiences for the first time.

“Honestly, part of the fun is going through the different crowds as much as the different cities, because you have to play a very different show for 50 people,” Chisel said. “Oftentimes, the more memorable shows for us come in those situations. … (In) markets where it may be the first time a person has maybe read about you in an article, that person is really going as a first time listener. You work the songs a different way when you realize people are hearing your songs for the first time, and that can be very exciting.”