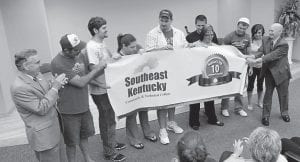 Reecie Stagnolia Jr., chairman of the Southeast Kentucky Community and Technical College Board of Directors, helps unfurl a banner naming the college as a finalist for the Aspen Prize for Community College Excellence. He and SKCTC President Dr. Bruce Ayers (left) were on the college’s Whitesburg Campus last week to announce the honor, which places the school among the top 10 community colleges in the United States.

There will be a big yard sale held at the home of Doris and Ray Adams on Thursday, the 13th, and Friday, the 14th, beginning at 9 a.m. It is located above Blackey on Hwy. 7 at the Frog Pond.

Happy anniversary to Roger and Dena Couch of Linefork. It was their 32nd on Sept. 6.

Logan Howard of Knott County had to go to Lexington on Wednesday to have tests run. He had cancer and had to have an eye taken out. They tested behind his eyes and did a MRI and we are so thankful he is cancer free. Logan is the son of Jaimie Sparks and Clint Howard.

My sympathy to the family of Bill Winstead of Jer- emiah. He died on Friday, Sept. 7. He had been sick for a long time.

Late happy birthday to my niece, Shanna Fugate Adams of Letcher. It was on the 4th. Her husband Brandon sent me a email to let me know how much he enjoys my column. That was so nice of him.

Happy birthday to Susan Stamper Tyree of Whitesburg. It was on Sept. 4. Ron Brunty of Letcher had a birthday the 5th and Zoni Hampton of Red Star on the 7th.

Wesley Dixon, the son of John and Jenny Dixon of Carcassonne, got to come again from hospice care last week. He is doing some better. I wish him the best.

My cousin Rhonda Hatton Hudson is in hospice care right now. She has cancer and is having a really hard time. I so hope she can come home soon.

My son Justin and his girlfriend Jessica Sparks of Blackey had company for a few days recently. Jessica’s aunt Neshia Sparks and her cousin Kathy Engle came in from Ann Arbor, Mich. Neshia stayed with them. She is the sister of the late Jeff Sparks of Neon.

Happy anniversary to Bill and Joan Johnson of Woodrock. It was their 47th on Sept. 7.

Joe Duke of London had to be taken to the hospital on Friday. His blood pressure was way too high and they were doing tests on him to find what the problem was.