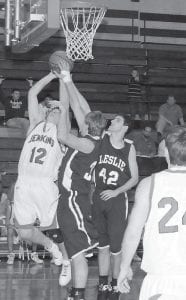 Chris Ramey of Jenkins drove underneath for a shot late in the game in the Cavaliers’ 70-43 loss to Leslie County.

Letcher County Central’s boys’ team had a big week in basketball action, knocking off regional power Breathitt County in Jackson, 58-41, to improve to 3-1, then traveling to Bourbon County over the weekend to play in the Kentucky Bank Shootout in Paris.

This was a prestigious tournament that had defending state champion Mason County in the field as well as Clark County, Louisville Doss, Franklin County and others.

The Cougars took on Owen County and used a big first quarter to go in front 20-11 after one. Owen County owned the second quarter and pulled within four at the break, 34-30, as they outscored the Cougars 19-14 in the quarter.

The two teams played close, but the Cougars maintained their lead and led 50-45 after three quarters.

The Cougars had a big fourth quarter and put up 17 points to pull out to a 10-point lead late. They won 67-57 in a big showing for Letcher Central. With the victory, the Cougars improved to 4-1 on the season.

The Cougars were led by senior Devon Blair with 19 points as he controlled the point. They got 15 each from junior Cole Cornett and senior Josh Profitt. Senior Charlie Banks got double figures with 10, and rounding out the scoring was jnior Brock with 4 and seniors Eric Ison and Jordon Reynolds with 2 each.

The Cougars were scheduled to play a big district match-up with June Buchanan last night (Dec. 23) at home, then will host Estill County on the Dec. 27. The Cougars will travel to Belfry on December 29-31 to play in the Mountain Schoolboy Classic, and will play in the WYMT Mountain Classic in January. It will be the team’s first appearance in the annual event hosted by WYMT television.

It looks like they have a lot on their plate in the coming days and it should really help them later in the season.

On Saturday night, the Letcher County Central Lady Cougars took on the Lady Crusaders of June Buchanan on the final night of the Lady Cougar Christmas Classic. The Lady Crusaders (5-2) are going to be a force this year in the region. They had won their two earlier games in the tournament, downing Hazard by 3 on night one in a close game and then blasting Jenkins (66-29) on night two. 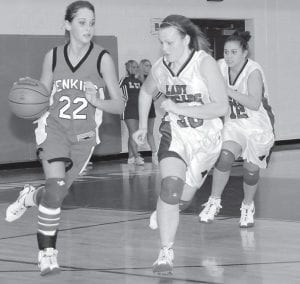 The two teams traded punches in the first half as the Lady Cougars led 15-14 after one and 35- 29 at the break but, much as they did against Hazard, the Lady Cougars blew it open in the third as they outscored the Lady Crusaders 21-6 and the lead increased to 56-35 after three quarters.

The Lady Cougars got 21 points from junior Brittany Sexton, 12 each from senior Sharaye Kincer and sophomore Shannon Bays. They got 7 each from eighth-grader Kelah Eldridge and freshman Erica Meade. Sophomore Chloe Wynn had 4 and rounding out the scoring were senior Tierra Baker with 3, and sophomore Myrika Begley and freshman Haley Whitaker with 2 each.

After blasting the Lady Cavaliers of Jenkins 64-14 on Thursday night, the Letcher Central Lady Cougars played the Hazard Lady Bulldogs on Friday night on the second night of the tournament.

The Lady Bulldogs took their first loss of the season on Thursday against June Buchanan to fall to 4-1. It was tight at the end, but the Lady Crusaders pulled it out.

Sharaye Kincer got her 22nd point early on in the fourth period to make the score 65-34, and all that was in doubt was the final score. The final was 70-41 as the Lady Cougars improved to 6- 1 and Hazard fell to 4-2.

The Lady Cougars outscored the Lady Bulldogs 40-19 in the second half. They were led by Sharaye Kincer’s 22 followed by Tierra Baker with 10, Kelah Eldridge with 9, Brittany Sexton with 8, Erica Meade with 6, Shannon Bays and Haley Whitaker with 4 each, Micca Boggs with 3, and Lauren Thomas and Myrika Begley with 2 each to round out the scoring.)

The Lady Cougars dominated this tournament and now they must get ready to travel after Christmas to Hendersonville, Tenn., to play in the Beech Holiday Tournament on December 27, 28, and 29. The Lady Cougars are very young but they continue to improve every game and they are really starting to find their roles.