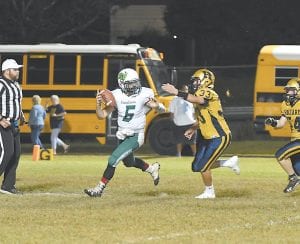 The Cougars used a balanced offensive attack and stingy defense to take a 38-0 lead into halftime of the team’s first district contest of the season.

Perry Central returned the opening kickoff to its own 36-yard line. On 3rd and 6, LCC defensive lineman Noah Brock wrestled the ball away from the ball carrier and returned the fumble to the PCC 43-yard line. Letcher Central quarterback Nick Sergent threw a wide receiver screen pass to Tannar Lucas for a 25-yard gain. On the next play, Sergent threw a 16-yard touchdown pass to Gage Isaacs on a fade pattern to the right side of the end zone. Tannar Lucas caught a pass and dove just across the end zone for the two-point conversion to give LCC an 8-0 lead.

On 3rd and 8, Lucas broke up a pass to force Perry Central to punt and on the subsequent punt Lucas broke the return for an 84-yard touchdown. Sergent threw a slant pass to Tyler Boggs for the conversion to increase the Cougars’ lead to 16-0. 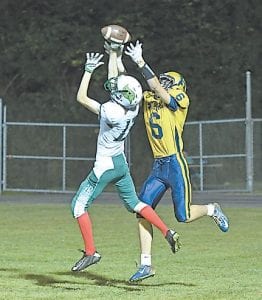 Jenkins’ Lance Bentley went into the air to break up a pass in the end zone in Friday’s loss to Hazard at home. Jenkins is still searching for its first win, but looks to repeat last year’s victory over Phelps when the two team square off this week.

Perry Central moved the ball into LCC territory, but a key Triston Polly sack led to a turnover on downs for the Commodores.

Christian Broderdorp caught a pass from Sergent on an in-route and broke two tackles on his way to a 61-yard touchdown. The score stayed at 22-0 after the conversion attempt failed.

Next, the Letcher Central defense forced a three-and-out and the offense quickly capitalized on the poor punt with a 2-yard touchdown run by Quade Adams. The twopoint conversion increased LCC’s lead to 30-0.

Perry Central was forced to punt again and the ball was downed inside the LCC 20-yard line.

Cougar running back Tyler Isaacs followed with two nice runs totaling 19 yards. Then on 3rd and 1 Lucas caught a slant pass from Sergent and went 31 yards. The drive culminated with a 1-yard touchdown pass from Sergent to Adams. The two-point conversion increased the lead to 38-0 with 4 minutes left in the second quarter and instituted a “running clock” for the remainder of the game.

Gage Isaacs returned the second-half kickoff 63 yards to the PCC 9-yard line. On the next play Cougar running back Kaleb Mullins scored on a touchdown run. The conversion was no good to make the score 44-0.

Letcher Central recovered the squib kick at the Perry Central 40-yard line. Mullins took the handoff and broke free for a 40- yard touchdown. Mullins also ran in the two-point conversion.

With the “running clock” shortening the game, Perry Central scored a touchdown late in the fourth quarter to make the final score 52-8 after successful two-point conversion.

Nick Sergent completed 9 passes on 12 attempts for 176 yards and 3 touchdowns. Kaleb Mullins led LCC in rushing with 50 yards on 4 carries and 2 touchdowns. Tannar Lucas had 87 yards receiving and a long punt return touchdown.

Avery Stamper, who had 12 tackles, led the defense. Isaiah Cornett had 6 tackles and Triston Polly had 5 tackles and a sack.

Letcher Central will host Harlan County this Friday at 7:30 p.m. at Cougar Field.