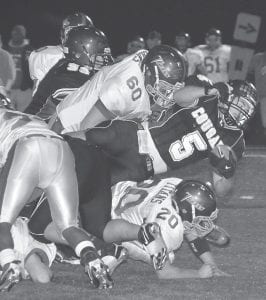 Letcher County Central’s Dustin Brown dives over the Mercer County defense to get a couple of extra yards in the Cougars’ opening round playoff win. The playoffs continue at Ermine this week. (Photo by Chris Anderson)

It’s playoff time in the mountains, and the Letcher County Central Cougars are making some noise.

The Class 5A District 8 Champion Cougars have now set their sights on a region title and it all began this past Friday as the Cougars hosted the Mercer County Titans at Ermine.

The Cougars have been led by talented sophomore Logan Johnson at quarterback, and he has been productive through the air and on the ground. He has completed 92-160 passes for 1,390 yards and 16 touchdowns. He has picked up 814 yards on the ground and 12 touchdowns.

Senior Dustin Brown has picked up 14 touchdowns on the season, and along with Greg Collins as well as Travis Stephens, who are both seniors, the Cougars have a solid ground game.

The Mercer County Titans entered the game at 1-9 with their only win coming against Lincoln County. The Cougars beat Mercer County last season in the playoffs, so they are old acquaintances.

Letcher Central entered the game as district champ with a record of 8-2. Its only losses came from Belfry on a last second miracle by the Pirates, and from Harlan County on an even bigger miracle, in my opinion, because Harlan County was a district game.

So the Cougars are at best three plays away from being a perfect 10-0. But records are thrown out and the new season begins. You lose, you go home.

The Cougar faithful packed the house and the Cougars received the opening kick. They opened the game at their 31-yard line. Behind the passing of Johnson, the Cougars quickly moved to the Titan 13 with receptions by Dustin Brown, and a run by Greg Collins.

The Cougars were using a hurry-up offense. It was good to see Greg Collins back after an injury. Johnson then hit senior Chase Adams at the 4-yard line with a pass, and with cousin Tim Couch on hand, he scored on the next play on a quarterback keeper, and the Cougars were off and running.

It was 7-0 after McKenzie Smith kicked the extra point with 9:52 left in the first quarter.

Starting at their own 17, the Titans ran out of an I formation. It was a quick three-and-out for the Titans as the Cougar defense stepped up to force a punt from the Titan 25-yard line. But the punt never happened. It was a fake, and the Cougars were caught completely off guard and the runner made it all the way to the Cougar 42-yard line for a big first down.

The Cougars were on their heels as the Titan quarterback connected with his receiver on the 29-yard line. They moved down to the 10, but after a big hit by big Ryan Hall for a loss of 2 the Titans again faced fourth down. This time they opted for a field goal, and it was good. So with 7:03 left in the first quarter the score was 7-3 Cougars.

Call it early playoff jitters or whatever, but the Cougars were unable to mount anything on their second drive and were forced to punt.

Nathan Maggard punted and it went almost to Walmart, and the Titans started at their 33-yard line. The Titan quarterback got out of a sure sack and picked up a big first down out to the 48-yard line.

He was hit and almost brought down in the backfield, but managed to get away. A late hit was called on the Cougars and the ball was moved to the 38-yard line.

Morris took it to the Cougar 10- yard line and the Titans were looking sharp. The quarterback took it in from there, and the stunned crowd watched as the Titans took the lead 9-7. The point after was blocked by Cougar Ryan Hogg.

As the second quarter got underway the Cougars moved out to the 40-yard line on a run by Johnson. Greg Collins picked up a huge chunk of yardage and moved the ball all the way to the Titan 22.

Freshman Drew Bentley got the call from there and the speedster did not disappoint as he took it home. The Cougars had quickly regained the momentum and the lead at 14-9. Mercer County punted on its possession after picking up one first down.

The Cougars did not waste any time. Greg Collins quickly moved the Cougars to the Titan 38 on two running plays, but Johnson was sacked for a huge loss back to near mid-field. He responded by picking up a first down on the next play, down to the Titan 32 on another keeper.

On the next play he hit surehanded Robbie Huff with a 32- yard scoring strike, and the score was now 20-9. Huff has really been a valuable piece of the Cougar offense in the last few weeks, and it is good to see him getting his number called more often.

The Titans started back on offense at the 34-yard line after a big hit by freshman Chris Tyree. This kid will paralyze you if you are not ready, and he nearly did that to the receiver.

The Cougar defense tightened up and moved the Titans backward to force the quarterback into a hurry-up throw, the receiver bobbled it and dropped it, and the Cougars’ Travis Stephens recovered at the Mercer 21-yard line.

The Cougars tacked on another score as Drew Bentley again took the honors from the one-yard line. The Cougars had scored three times after falling behind 9-7 to take a commanding 28-9 lead into the locker room at half-time.

The Titans tried another field goal before the break, but it was no good. They opened the second half on offense, and were forced to punt from their own end zone after the Cougars defense did an outstanding job again.

Travis Stephens returned it all the way to the Titan 6-yard line, and a first and goal for the Cougars. Greg Collins took it in from there and the score increased to 34-9, and the Cougars were not done.

On the next Titan possession, the Cougars stripped the ball from the Titan ball carrier and recovered at the Titan 34 yard line. Johnson hooked up with Travis Stephens for another Cougar score with 6:03 left in the third quarter, and the rout continued.

With the score now 41-9, the defense continued to dominate for the Cougars and set up another Titan punt. Koree Stewart came from his defensive end position on one play and brought the crowd alive as he nearly broke the ball carrier in half.

As the younger players hit the field the Cougars started from their own 7-yard line. They got another score later in the third quarter from Josh McBee, who scored from one yard out. The final score came on an end around play by Mr. Excitement (freshman Chris Tyree) as he took the handoff and went 58 yards for the Cougars.

The game ended with the score 53-9, and the Cougars advance to the second round. The Titans could never get back in the game and when something would go right, they would fumble or turn it over. They fumbled four times.

The Cougars move to 9-2 and will now get set for the big rematch against Harlan County.

Harlan County beat Pulaski South Western 21-7 to advance to the second round. Mercer County ends its season at 1-10.

Greg Collins was the big gun with 95 yards and one touchdown on 8 carries. The Cougars picked up 274 yards on the ground.

Things are really heating up now and the Cougars are rolling. Harlan County had better bring its ‘A’ game because Coach Hillard Howard lives for these moments, and the Black Bears will face a different bunch of Cougars this time around.