Cougars are a No. 2 seed 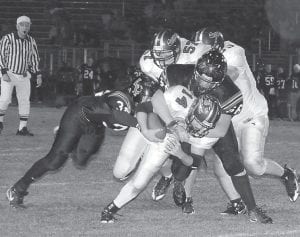 Quarterback Charlie Banks, shown here being stopped by Lawrence County’s defense, has helped lead the Cougars to another another playoff appearance. (Photo by Chris Anderson)

You know, high school football is so unpredictable. The Letcher Central Cougars are a number two seed in the playoffs and they will play Pulaski Southwestern in the opening round of the playoffs at Ermine this Friday night. But the Perry Central Commodores had to lose to Prestonsburg for that to happen and the Commodores did just that as they lost a heartbreaker 21-20 to the Blackcats.

The reason I say high school football is unpredictable is this. Perry Central beat the Cougars by one early in the season and then got beat pretty handily by Whitley County (48-7) and Clay County (39-25). The Cougars beat Clay County 41-14 and lost to Whitley (22-14).

I know you go on points and the quality of teams you play, but it looks like it should be based on what you did in the district. That is only my opinion and that’s all I have to say about that.

The Cougars are a number two seed, as they should be, and Whitley County is the number one team in the district with Perry and Clay County rounding out the top four. The Cougars will host a big and quick Southwestern team that will come in with a 5-5 record and with having to play the likes of Danville, Somerset, and Lexington Dunbar, it’s easy to see why. They are coached by Dale Anderson and will look to come to Ermine and knock off the homestanding Cougars.

The Cougars will be ready and will look to start their quest for a region championship. But first they played a final regular season game on the road against a very young Lawrence County team this past Friday night.

Lawrence County has really struggled this season and entered the game at 0-9, but they have played the big boys tough. They lost to Belfry 20-13 and Prestonsburg 19-12. The Cougars could not afford to slip up and go into the playoffs with a loss. The field was a mud bowl with rain and mud and everything to make it perfect football weather.

Lawrence County opened the game on offense and quickly went three and out. The Cougars started quick on offense as Charlie Banks led the Cougars downfield connecting on a 50- yard pass to the Lawrence County 2-yard line. Banks took it in from there and the score was 6-0 Cougars.

The first half was marred with turnovers as Lawrence threw three interceptions. It was also a sloppy first half as the Cougars were penalized 10 times and turned the ball over twice. But the main thing was they had the lead and they added to it as Banks connected with Dustin Brown for another score to make the score at half 14-0. McKenzie Smith had two big tackles behind the line of scrimmage in the first half as he kept pressure on the ball.

The field situation only got worse as the Cougars opened the second half on offense. Dustin Brown returned the kick to the Lawrence 45. Michael Frazier picked up 20 on first down to the 25. The Cougars got to the 2-yard line but they fumbled and Lawrence County recovered.

This seemed to ignite the Cougars as the defense quickly forced another punt from the goal line. The Cougars got the ball at the Lawrence 38 and took advantage of the field position. Banks and Co. quickly moved to the 4 behind Travis Stephens and Dustin Brown. Michael Frazier took it home from there and it was 20-0 at 2:25 of the third.

Lawrence County got the ball back and tried to penetrate the Cougar defense, but that did not happen as the Cougars forced a fourth down. Lawrence County attempted to go for the first down. The pass was incomplete and the Cougars took over deep in Lawrence territory. Banks carried for 20 on first down inside the 5-yard line at the end of the third quarter.

The fourth opened with Caleb Frazier taking it home from five yards out to make it 26-0. Lawrence County returned the kickoff all the way to the Cougar 25 but the Cougar “D” was too much and they turned it over on downs.

The Cougars would be forced to punt the ball back, and again they forced a turnover on downs by Lawrence County. On the first play Dustin Brown took off on an end around play that put the ball at the Lawrence 19-yard line. With Logan Johnson now at quarterback, he passed to Dustin Brown at the 2-yard line and Travis Stephens took it home from there for a 32-0 Cougar lead with 3:23 left in the game.

The Cougars would add on one more score as Lawrence County was penned up deep inside their own 20 and the quarterback fumbled. Michael Frazier was all over it as he picked it up and took it in for the final score.

That would be it as the Cougars had recorded their third shutout of the season, 39-0. The Cougars improved to 8-2 and Lawrence fell to 0-10. They are very young and they will be back.

Now the real fun begins as the Cougars hope to advance one step further this year than they did last year or maybe even two steps.