Cougars are looking for momentum 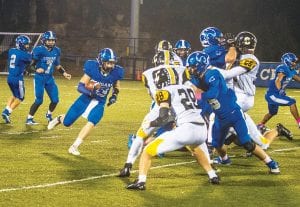 Letcher Central’s Jacob Baker looks for a path while carrying the ball for a first down in Friday’s 48-0 loss to Class 4A powerhouse Johnson Central. (Photo by Chris Anderson)

The Letcher County Central Cougars are looking to rebound from a 48-0 loss to Johnson Central last week and gain some momentum as they head into the post-season. The Cougars, now 3-6, will host Floyd Central this Friday at Cougar Field.

Johnson Central played like the undefeated powerhouse they are in last Friday’s game, which had a “running clock” the entire second half. LCC only had 80 yards of total offense but will look to improve this Friday on senior night at Ermine. Floyd Central, also 3-6 on the season, is coming off a 48-18 loss to Lawrence County.

Johnson Central received the opening kickoff and on the second play of the game Devin Johnson had a 55-yard touchdown run on a counter play. The extra point gave the Golden Eagles an early 7-0 lead.

LCC went three and out and the Cougars had to punt from their own three-yard line. Johnson Central took advantage of the great field position and scored on a 17-yard run by Johnson to increase the lead to 14-0.

On the next LCC drive, facing fourth down and three to go, a pass was intercepted by linebacker Hunter McCloud who undercut a slant route and returned the interception for a touchdown to make it 21-0 midway through the first quarter.

LCC got a first down on an 11-yard run by Alex Blair, but the Cougars were stuffed three plays later on fourth and short to turn the ball over on downs.

LCC was forced to punt again and a long punt return led to a 17-yard touchdown run by Cody Rice to increase the lead to 35-0.

After yet another LCC punt, Preece connected again with Russell for a 35-yard touchdown to make it 41-0. That margin resulted in a running clock for the rest of the game after the extra point was no good.

On the opening drive of the second half, LCC running back Dalton Honeycutt gained 11 yards on a fullback dive play to give the Cougars a first down at their own 35-yard line. The Cougars got one more first down but were forced to punt near midfield.

Johnson Central used a 12- play 83-yard drive to chew up almost a quarter of game time as the clock ran continuously and scored on a 19-yard rushing touchdown to increase the lead to 48-0.

LCC got just into Golden Eagle territory as time expired to make the final score 48-0.

The Cougars could never get anything going offensively the entire night. Hunter Campbell was held in check, gaining 22 yards on 12 carries. Dalton Honeycutt gained 35 yards rushing on 10 attempts. Alex Blair had 20 yards on seven carries for an LCC offense that had 80 yards of total offense for the game.

Sam Little and Hayden King each had five tackles to lead the LCC defense.

The Floyd Central Jaguars compete in Class A, District 8