Cougars are no match for tough Franklin Co. 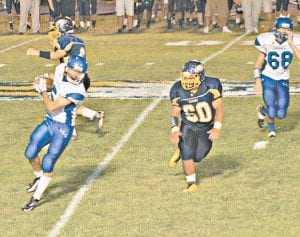 The Letcher County Central Cougars traveled to the state capitol to take on the undefeated Franklin County Flyers and leading Mr. Football candidate Ryan Timmons. Franklin County came into the game averaging more than 60 points a game and LCC Head Coach Paul Rains knew that slowing the Flyers down would be a daunting task for the Cougar defense. Letcher Central lost 77-28 to Franklin County even though the Cougar offense racked up almost 700 yards of total offense and ran 91 offensive plays compared to 482 yards on 34 plays that the Flyers offense ran.

LCC got the ball first in the game and started at its own 20- yard line after the kickoff. Cougar quarterback Zane Blair rolled to the right and found Josh Boggs for a 13-yard gain on the first offensive play of the game. Completions to Dylan Kincer, Keaston Hall and Chris Tyree all resulted in first downs. On 4th and one from the Flyer 20 yard line, Tyree took a handoff and rumbled 11 yards to make a first and goal. On 2nd down Blair was sacked from his blindside and the Cougars eventually turned the ball over on downs. The drive went for 65 yards and lasted over five minutes, but unfortunately resulted in zero points.

The vaunted Flyer offense took no time to show how explosive they are. Freshman Landon Hurst took the handoff and scored from 84 yards out. The extra point was good making it 7-0 in favor of the Flyers.

On the next Cougar possession facing a 3rd down and four, Blair found Tyree wide open on a crossing route for a 41-yard gain. A screen pass to sophomore running back Hunter Hall gained 13 yards and two plays later Tyree took the handoff and scored from two yards out. The snap on the extra point was botched and the Cougars were down 7-6 with just under four minutes left in the first quarter. Isaiah Lee took the kickoff 70 yards for the touchdown and the extra point making the score 14-6.

Blair was intercepted on the next series by Flyer linebacker Lorenzo McCaskill. Timmons caught a 38-yard pass on which he leaped over two Cougars defenders to make the catch. Running back Chris Roberts scored on an eight-yard touchdown run on the next play to give the Flyers a 21-6 lead with 2:36 left in the first quarter.

The next LCC offensive possession resulted in another turnover and Franklin County scored immediately when quarterback Logan Woodside found McCaskill for a 36-yard touchdown. At the end of the first quarter the Cougars were on the wrong end of the score 28-6.

On the first play of the second quarter Blair connected with Keaston Hall for a 27-yard gain to get across midfield. Then Keaston Hall went in motion, took the handoff and proceeded to drag numerous Flyers defenders with him for a 20-yard gain. Tyree caught a slant route from Blair for 16 yards. On the next play Tyree bulled his way in from five yards out. The two-point conversion was unsuccessful and LCC had cut the lead to 28-12.

Franklin County started the next drive on the Cougar 21 yard line after an onside kick attempt. Timmons had a 19-yard run and then a touchdown run around the left side from two yards out. The extra point was good making the score 35-12. Roberts scored his second rushing touchdown from eight yards out after the LCC offense went three and out to put Franklin County ahead 42-12.

LCC started the next possession at its own 12-yard line. Facing 3rd and eight, Keaston Hall ran a hitch and go route and Blair pump faked and threw a perfect pass to Hall for an 84-yard touchdown. Tyree caught a shovel pass to score on the two-point conversion to make it 42-20.

Letcher Central was unsuccessful on an onside kick once again. On the next play Timmons caught a pass from Woodside and took it in for the score from 39 yards out. The score was 49-20 after the extra point sailed through the uprights.

Letcher Central started again at its own 12-yard line and Blair found Tyree on a crossing route for a 25-yard gain. Keaston Hall caught consecutive passes of 11 yards to get to midfield. Blair’s next pass was tipped in the air and Landon Hurst intercepted the ball and returned it for a 65-yard touchdown to make the score 56- 20 at halftime.

Franklin County got the ball first in the second half and quickly scored on a 19-yard touchdown run by the speedster Timmons.

The Cougar offense looked great once again on their next drive. Blair found Tyree on a 16- yard completion to convert a third and long. Facing 4th and one, Blair found Keaston Hall alone for a 18-yard gain and two personal foul penalties against the Flyers moved the ball deep into Franklin County territory. Two plays later Tyree scored on a 17-yard run for his third touchdown of the game. Dylan Kincer caught a pass from Blair for the two-point conversion to make it 63-28 midway through the third quarter.

Franklin County returned the onside kick attempt to the LCC red zone and Timmons capped the drive off with an eight-yard touchdown run. LCC turned the ball over on downs and Woodside connected with McCaskill on a 39- yard touchdown pass to make the score 77-28 in favor of Franklin.

Both teams played backups during the entire scoreless fourth quarter. Sophomore Austin Pease played a series at quarterback and completed his first pass as a Cougar to Ryan Alzuraqi. The drive stalled and after forcing a three and out the Cougars put in freshman Aaron Thomas at quarterback. Facing a 3rd and 22, Thomas had a nice 10-yard run to show a glimpse of the future of this Cougar offense. The experience for many of these young LCC players will no doubt help in their future development.

LCC played hard the entire game, and other than the three turnovers the offense played as good as it could possibly play. Blair completed 28 passes on 43 attempts for 461 yards and didn’t even play any in the fourth quarter. Tyree had three rushing touchdowns and the LCC rushing attack netted over 200 yards on the night. Keaston Hall was spectacular once again catching 13 balls for 268 yards and a score. Hunter Hall had almost 100 all-purpose yards and Kincer caught four passes for 22 yards.

The Franklin County speed was simply too much for the Cougar defense. Last week Breathitt County had only one score from more than 20 yards out, but in this game the Flyers repeatedly scored on big plays. The offense is getting better on a weekly basis and look for the defense to make adjustments and fair much better next week when they host Montgomery County in the home opener at 7:30 p.m. on Sept. 7.