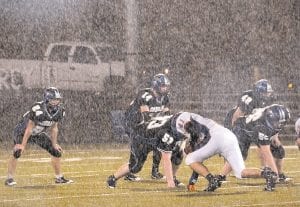 The play-off road promises to be a little tougher for Letcher County Central this week. The Cougars defeated Pulaski Southwestern, 34-6, in their opening round game at Ermine last Friday and are now preparing to meet a team that may be their toughest foe yet — Mercer County.

Mercer County totally plastered Perry Central 57-21 in their first-round match up. Mercer County is big and quick and although their record is 6-5 they should be the best team the Cougars have faced this year. With Letcher Central Coach Hillard Howard doing what he does best at this time of year — advancing in the play-offs — it should be another great game.

Determined to prove once again that they can win in the rain, the Cougars received the opening kick and moved out to the Warriors’ 45 before they would have to punt it away. After the Warriors were forced to punt themselves, Pulaski Southwestern’s punter panicked after a bad snap from center and kicked the ball out of the end zone for a safety and a 2-0 lead for the Cougars.

With the Warriors then having to kick the ball back to the Cougars from their own 20, Travis Stephens was able to return the kick to the Warrior 47. From there, Dustin Brown picked up four yards to the 43 yard line and Stephens took the ball to the 33 on the next play. Greg Collins got the call on the next play and the field opened up and he was gone for a 33 yard touchdown and a quick 9-0 Cougar lead with 5:30 left in the first quarter. Both teams punted on their next possession and the quarter came to an end.

After another Warrior punt from deep in their own territory, the Cougars got the ball back at the Warrior 42. Charlie Banks quickly fooled everyone with a perfect pass to Chase Adams all the way down to the Warrior twoyard line and a big first down. Banks walked it into the end zone from there, helping the Cougars to a 16-0 lead after kicking the point after.

Banks then kicked the ball off for the Cougars and pinned the Warriors deep at their own nineyard line. The Cougar defense, which was nothing short of amazing all night, forced another punt. This time the punter dropped the ball and the Cougars were all over it at the Warrior 14. From there, Greg Collins quickly moved the ball to the seven and a penalty on the Warriors moved it to the three, from where, you guessed it, Banks took it home. No one can stop Banks inside the three unless they are driving a vehicle and he would probably still give them a run for their money. It was 22-0 Cougars with 7:00 left in the half. 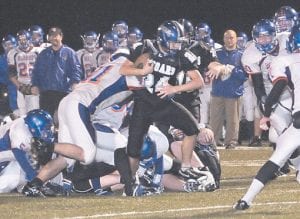 With each stop of the Warriors the Cougar defense, led by defensive coordinator Delano Thomas, gained a little more momentum. The Warriors did not advance into Cougar territory until late in the first half. but again the defense stepped up and shut down the drive as a pass to the 15 was knocked down by Michael Frazier and Logan Johnson. Nate Adams got a big sack and the Warriors got a penalty and were forced to punt. The Cougars moved the ball out to the 49 yard line after a 24 yard run from Banks, but he fumbled on the next play and the Warriors got one play with two seconds in the half but the Cougars stopped it. 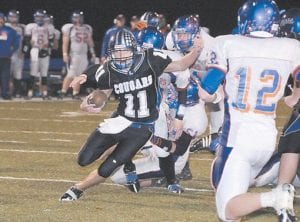 Travis Stephens tries to get around defenders.

The Warriors opened the second half on offense and move out to the Cougar 45, but they fumbled in the wet conditions and the Cougars’ Dustin Brown recovered the ball at mid-field. Greg Collins then got the cold crowd on its feet as he ran the ball 38 yards to the Warrior 12. Banks added on three more yards before Collins found the end zone from nine yards out. The score grew to 28-0 with 7:47 left in the third quarter.

Each time the Warriors mounted a drive they turned it over. After moving the ball to the Cougar 45 and then 12 more yards to the 33, they fumbled again and the Cougars recovered. Offensive coordinator Ben Howard then called for a bomb from the 31 yard line and Banks hit Kevin Wurschmidt in stride for a beautiful touchdown play that was called back on a holding penalty against the Cougars. The Cougars then turned the ball over after Banks was intercepted. The Warriors were finally able to convert. After moving with passes to the 26 and then down to the Cougar three yard line, quarterback Zack Woolridge rushed into the end zone for the Warriors’ first score, cutting the Cougars’ lead to 28-6.

The Cougars answered quickly, though. After Banks connected with Travis Stephens for a 19-yard pass to the 40, star of the game Greg Collins carried the ball to the Warrior 14 on one of his many big plays on the night. After the Cougars got the ball to the one-yard line, Banks took it on in for a 34-6 Cougar lead that would end the scoring for the night.

The Cougars would put up 301 yards on the ground and were led by Greg Collins, who rushed eight times for 146 yards and two touchdowns. Dustin Brown and Charlie Banks both had 59 yards and Banks had three touchdowns.

The Warriors were a huge team in numbers as well as in the size of their massive front line. They averaged well over 300 pounds on the line and had put up some big numbers rushing the football, having come into Friday’s game picking up 2,472 yards on the ground.

The Warriors are coached by Dale Anderson and finished the season with a 5-6 record, two of the losses coming to powerhouse Danville and Lexington Dunbar.

The Cougars improved to 9-2.