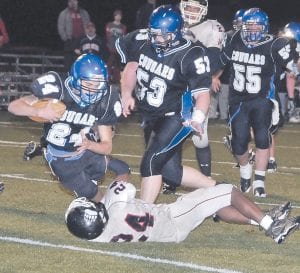 GAME-TYING PLAY — A long scoring drought was ended by Letcher Central’s Greg Collins on this rushing attempt. Collins was wrapped up, but not before breaking the goal-line plane for a Cougar touchdown that tied the game at 13. LCC scored the point-after and escaped with a 14-13 win over Harlan County. (Photo by Chris Anderson)

The Letcher County Central Cougars won a rematch with Harlan County, 14-13, and will advance to the regional finals of the Class 5A football playoffs. The Cougars (10-2) will travel to Somerset to take on Pulaski County (9-3) this Friday.

The Cougars hosted the Harlan County in Round Two of the playoffs. This was a big rematch of an earlier district game in which the Black Bears shocked the Cougars at Harlan County by the score of 12-7.

The two teams are a lot alike. The Cougars are big and strong and the Black Bears, which entered the game at 8-3 under head coach Tom Larkey, are just as big and just as strong. Harlan County is only in its second year of existence.

The fans knew it would be a smash-mouth football game and, boy, was it ever. The Cougars received the opening kickoff and Chase Adams returned it out to the Cougar 31-yard line. Sophomore quarterback Logan Johnson picked up 16 yards on a first down play out to the 47. He picked up 7 more on the next play, and then he handed off to senior Greg Collins, who picked up another first down to the Black Bear 29. 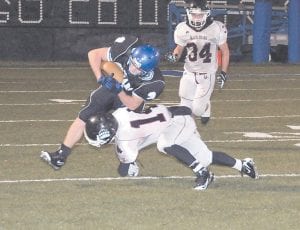 Letcher County Central sophomore running back Drew Bentley was tackled while returning a punt during the Cougars’ 14-13 win over the Harlan County Black Bears. (Photos by Chris Anderson)

Collins carried again all the way to the Bear 14, and the Cougars were rocking. Logan Johnson scored on the next play on a keeper from 14 yards out, but it was called back on a holding call and the ball was moved back to the 24.

The Cougars hit a wall and, after Johnson was sacked back at the 33-yard line, the Cougars were forced to punt, and all the early momentum quickly shifted to the Black Bears. They wasted no time.

On a third-down play the Bear quarterback called an end around play and it worked to perfection as the ball carrier carried it to the Cougar 42 for a big first down from his own 5-yard line. A five-yard face mask penalty on the Cougars put the ball at the 37-yard line. Harlan County just kept lining up and running straight at the Cougars.

The Black Bears would get inside the Cougar 5-yard line and finally, after three unsuccessful tries for the end zone, they scored on a fourth-and-one. Burgin took it in, and the Black Bears had scored first. The point after was also good, making the score 7-0. 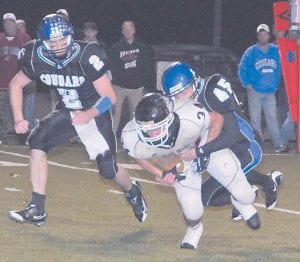 The Black Bears had controlled the clock and held the ball most of the first quarter. The Cougars would strike back in a big way.

Behind the running of Drew Bentley and Logan Johnson, the Cougars got to the Harlan County 15. Johnson called his own number and took it in from 15 yards out. The point after was good by McKenzie Smith to even up the score as the first quarter came to an end.

Harlan County opened the second quarter with a punt as the Cougar defense came to life. The Cougars mounted another drive. After starting at the 32, the Cougars’ Greg Collins carried it to the 39. A horse collar on the Black Bears put the ball down on the Black Bear 46 and a first down with 8:53 in the half.

Bentley carried it down to the 31, but on the next play Johnson’s pass was picked off at the 10-yard line by T.J. Green from his safety position. Green also played quarterback for the Black Bears.

The Harlan County offense took off and Green hit a big pass at mid-field for a first down. The pass threw everyone off because the Black Bears hardly ever pass. Behind Taylor and Green, the Black Bears let Taylor, who played running back, do all the work as he carried four straight times, and he delivered as the last 6 yards were for the go-ahead touchdown and the Bears were back on top 13-7 with 3:11 in the half. The Black Bears had covered 90 yards after the interception.

The point after was no good. The first half ended with another punt by the Cougars.

The third quarter was nothing but turnovers for both teams, as the Cougars intercepted a Black Bear pass on their first possession of the half, and then Logan Johnson threw his second interception on the Cougars’ next series. Harlan County also fumbled on a couple of punts.

The Cougars came up with another Black Bear turnover as Dustin Brown stripped the ball carrier early in the fourth quarter and the Cougars had the ball. The Cougars got an automatic first down on a third-down play as Harlan County was called for a personal foul on a vicious hit on Logan Johnson.

The Cougars needed to muster up all their energy against the big Harlan County line and to move the ball as time became a factor. Greg Collins carried to the Harlan County 32 on a second-down play.

On a third-and-one, Johnson picked up a first down to the Black Bear 20 with 8:57 remaining. Johnson carried again to the 11, and the Cougars got stopped for no gain on the next play, setting up another fourth-and-one. Time out Cougars.

With the big guns coming in to block out of the backfield, Greg Collins picked up 5 yards for a first down to the 6-yard line, and then on a beautiful delay he carried it home on the next play to even the score at 13. McKenzie Smith kicked the extra point and split the uprights to give the Cougars the 14-13 lead.

Just as quickly as the Cougar momentum shot up, the Black Bears brought them back to earth on the ensuing kickoff. They returned it all the way to the Cougar 42-yard line and were back in business.

With time running out, the Black Bears went to the air and that was a mistake as the Cougars stopped them on a fourth-down play in which they tried a little trick play with a halfback pass, but the ball was thrown behind the receiver.

The Cougars took over with 3:58 in the game. On a third-and- 16 play Johnson hit Dustin Brown with a pass that he bobbled and held onto to pick up a huge first down that was mostly all determination and heart by Brown.

This was the play the Cougars needed. They held on and ran out the clock, and ended the defensive struggle of two very good teams. The Cougars had won the rematch and, more importantly, they were going to the region championship.

McKenzie Smith was everywhere on defense for the Cougars and kicked the winning extra point, so he gets the player of the game, but Dustin Brown’s big firstdown play that enabled the Cougars to keep the ball made him a candidate also.

The Cougars were shut down through the air, but this was a game that was won in the trenches. The Cougars will now go on the road to take on Pulaski County for the regional title.

Pulaski spoiled the Cougars’ possible rematch with Whitley County as the Maroons won by 7 over the Colonels.

The Cougars are ranked No. 6 in Dave Cantrall’s ratings of Class 5A teams which appear each week in the Lexington Herald-Leader. Cantrall rates Pulaski County No. 8.