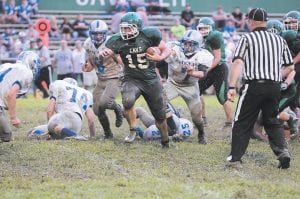 Jenkins junior Andrew Oliver broke through the defense in Friday’s rain-soaked, lightning-shortened, partially blacked-out game against the Phelps Hornets. The Jenkins defense kept the Hornets in check throughout the first half, keeping the Phelps offense from crossing the 50-yard line for most of the half, which was completed with only two of the four masts of lights at the Jenkins football field working after two of the masts shut down during play in the second quarter. Red zone fumbles, however, kept the Cavaliers from capitalizing on their defensive strengths and, despite sitting on a 0-0 tie, the game was called at halftime due to severe weather which moved through the region. The tie could hold ramifications for the two teams later in the season, as the Cavaliers and Hornets are two of the four teams in Class A-District 6. (Photo by Chris Anderson)

The Letcher County Central Cougars, coming off an impressive 30-0 win over visiting Berea in last Friday’s season-opening football game, will host McCreary Central in the second game of the 2014 season this Friday (August 29) at Cougar Field at 7:30 p.m.

Last week’s game was called because of bad weather with less than two minutes remaining in the first quarter. By that time, however, the explosive LCC offense had already amassed 193 yards and scored touchdowns on all four possessions in the shortened contest.

The Pirates started their first possession at the 35 yard line after the opening kickoff sailed out of bounds. Senior Letcher Central defensive tackle Jacob Kiser had consecutive tackles for loss to force a quick three and out. The Berea punt was downed at the LCC 24 yard line and the Cougars would waste no time scoring on their first drive of the year.

LCC senior running back Hunter Hall gained 34 yards on a toss sweep around the right side of the line. Then facing third down and three, Jaylyn Williams scored a 35-yard touchdown on a draw play in which he broke a tackle and simply outran three defenders to the corner of the end zone. Zane Blair tacked on the extra point to give the Cougars a 7-0 lead with 9:18 left in the first quarter.

Jacob Kiser had yet another tackle for loss to force the Pirates’ second punt of the game. The punt was downed at midfield to give the Letcher Central offense great field position. Hunter Hall gained 12 yards on a trap play right up the middle. Then senior quarterback Zane Blair hit Josh Lee on an in route for a 16-yard gain. The drive was capped off with a 20-yard touchdown pass on a wide receiver screen from Blair to sophomore Tanner Lucas. Blair made the extra point to make the score 14-0.

The Cougar defense was stout once again and Berea was forced to punt after Zane Blair tackled Berea running back Craig Mowery for a 3-yard loss on third down. Hunter Hall had a 17-yard punt return that brought the ball all the way to the LCC 27-yard line. Blair threw a perfect fade pass to receiver Isaiah Tyree for a 15-yard score two plays later. The extra point was right down the middle to increase the LCC lead to 21-0 with 5:28 to go in the first quarter.

Kiser and Blair combined on a sack of Pirates quarterback Kevin Reed that made it third down and 17 deep in Berea territory. The shotgun snap from center sailed over Reed’s head and went out of bounds at the back of the end zone resulting in a safety to make it 23-0 in favor of the Cougars.

On what would end up being the last possession of the game Blair threw a middle screen to Hall for a 17-yard gain. Hall then took a swing pass from Blair up the right side line 26 yards for a touchdown. Blair made his fourth straight extra point to make the score 30-0 with just under two minutes to go in the first stanza.

As the Cougars were about to kick off, game officials spotted lightning and the game was immediately suspended and put in a weather delay per KHSAA rules. If lighting is spotted at a KHSAA event, both teams are to go to the locker rooms and officials must wait 30 minutes from the last sign of lighting until they can restart the contest. After almost an hour delay and no sign of the weather getting any better the game was called giving Letcher Central a 30-0 victory in the season opener.

LCC Coach Mike Holcomb’s second season got off to a great start after a 4-7 record in his inaugural season at LCC last year. The Letcher Central offense has a bevy of weapons and four different Cougars scored a touchdown in the game. Junior Josh Lee transferred to LCC from Harlan County and standing at 6’3” he is a game changer on both sides of the ball. Playing the slot receiver position Lee drew double coverage all night, which opened the field for not only the other receivers but the Letcher Central running backs as well. The two- headed monster at running back of Hunter Hall and Jaylyn Williams combined for 97 yards on five carries and two touchdowns. Senior quarterback Zane Blair looked like a seasoned veteran by completing six passes on seven attempts for 97 yards and three touchdowns.

The most impressive aspect of the game however was the stellar play of both the offensive and defensive lines. Letcher Central clearly won the battle in the trenches. The offensive line led by senior Marcus Baker and junior Charlie Maggard continuously opened huge holes for the running backs and Zane Blair was not touched the entire game. Jacob Kiser, who had three tackles for loss, led the defensive line and the Cougar defense as a whole wreaked havoc in the Berea backfield all night long.