Cougars blast Pike Central for first win of the season 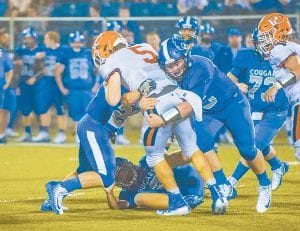 Letcher Central freshmen Hayden Brashear, left, and Jackson Meade, right, teamed up to take down a Pike Central rushing effort late in Friday’s win over the visiting Hawks. The Cougars controlled the game to secure the 50-0 win, the team’s first of the season. (Photos by Chris Anderson)

The Letcher County Central High School Cougars did not look like a team with a losing record in their 50 to 0 dismantling of Pike County Central.

Jonathan Sergent rushed for three touchdowns to lead the Cougars’ offense in its homecoming night win at Ermine last Friday. Four other running backs — Hunter Campbell, Sam Little, Zachary Hall and Kane Gibson — also rushed for touchdowns as LCC improved its season record to 1-4. Next up for LCC are the Perry County Central Commodores, who will host the Cougars in a Class 5A District 8 matchup this Friday night in Hazard. Kickoff is set for 7:30 p.m.

The unbeaten Commodores, who did not play last Friday, are coming off a 41-14 win over Class 4A Clay County on September 7. They have shown a high-powered offense in previous wins over Knott County Central (34 to 12), Breathitt County (54 to 39), and McCreary Central (48 to 18).

Thirty-five Letcher Central players saw action in their team’s win over Pike Central, which fell to 1-3 on the season. The Cougars’ offense rolled up a total of 237 yards on the ground, 72 of them gained by Hunter Campbell on only six carries. Sam Little ran the ball nine times for 68 yards, while Jonathan Sergent gained 50 yards on 13 carries. Zachary Hall carried the ball four times for 31 yards, and Kane Gibson picked up three yards on two carries. Quarterback Nick Sergent ran the ball three times for 16 yards.

With their running game working so well, the Cougars only passed the ball three times and completed one of those — that being a 57-yard hookup between Sergent and receiver Kalin Branham.

Kicker Zack Dollarhyde, who has starred for the LCC boys’ soccer team this season, was perfect on all five of his extra-point attempts. Hayden Brashear was successful on his only point-after kick.

Sam Mullins was credited with a quarterback sack. Hunter Brashear forced three fumbles and recovered one of them. Zach Hensley pounced on two fumbles, and Nick Sergent recovered one fumble.