Cougars bounce back with impressive victory 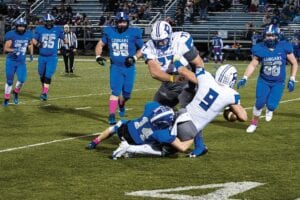 Letcher County Central improved to 5-1 after an impressive 18-7 win over powerhouse Paintsville. The game was scheduled midweek after both team’s regular games were cancelled because of COVID-19 protocols.

Paintsville came into the game at Ermine with a won-loss record of 5-1 that included a 54-0 pasting of Hazard and a 43-0 win over Perry County Central. The Tigers still have the fourth-best RPI among the state’s Class 1A schools.

The Tigers received the opening kickoff, and on fourth and nine the Tigers lined up in punt formation and snapped it to the up back on a fake who proceeded to run 15 yards for a first down. Two plays later, on third and 12, quarterback Jake Hyden avoided a sack and threw a bomb to receiver Zach Taylor for a 56-yard gain. Hyden capped off the drive with a two-yard touchdown run to give the Tigers a 7-0 lead after the extra point was good with 8:37 left in the first quarter.

LCC, which now has the fifth-highest RPI among the state’s Class 4A schools, started at its own 20-yard line after the kickoff. An eight-yard run by Hayden Brashear started the drive. Then Carson Adams gained 14 yards on a quarterback keeper. The drive stalled after that, but Jonah Little had a great angled punt that went out-of-bounds at the Paintsville four-yard line. The LCC defense stood strong and forced a 3 and out.

After a kick catch interference penalty against Paintsville gave the Cougars great field position at the Paintsville 32-yard line, Paintsville intercepted a pass on the first play of the series and returned it to its own 37-yard line.

The Tigers got one first down before good coverage on a fourth and two pass forced an incompletion and turnover on downs on the last play of the first quarter.

Early in the second quarter, LCC’s Sam Little showed great concentration on a tipped pass to haul in a 27-yard reception that led to a one-yard touchdown run by Carson Adams. The two-point attempt failed but LCC cut the lead to 7-6 with 8:30 left in the second quarter.

Defense reigned supreme the rest of the quarter and forced consecutive punts to keep the score 7-6 at halftime. On the Cougars’ first possession of the second half, facing fourth down and two yards to go, Adams connected with Sam Little for a 62-yard touchdown. The conversion failed but LCC took its first lead of the game, 12-7.

With the Tigers now in possession of the football, the Cougar defense forced a fumble that was recovered by lineman Jackson Meade. The LCC offense capitalized on that turnover with an impressive 32-yard touchdown run up the middle by Adams to increase the lead to 18-7. The Cougars now had control of the game.

After back-to-back three and outs, Paintsville used a 12-play drive to get into the red zone, but on fourth and five at the LCC 10-yard line, Hyden overthrew a receiver in the end zone for a turnover on downs.

Paintsville had one more lengthy 17-play drive, but the Cougar defense stuffed three straight runs from the one-yard line to preserve an 18-7 victory.

“Great defensive effort against a very good offense. We gave up some yards but only one score,” said LCC Coach Junior Matthews. “It was a great bounce back performance after last week.”

Jepatha Griffith had the most tackles on a stingy Cougar defense with 18 total tackles. Keaton Day added 14 tackles. Kaden Barnett and Jonah Little had 11 tackles apiece. Jackson Meade had 10 tackles and a fumble recovery. Dale Webb, Dakota Hall, and Cooper Bailey all had sacks for the LCC defense, which continued to make big plays on third and fourth downs to keep Paintsville scoreless after its opening drive.

The win improved LCC to 5-1 on the regular season while Paintsville fell to 5-2. It was not clear at press time whether the Cougars would play a game this weekend because of COVID-19 restrictions now in effect in numerous other Kentucky counties. If a game is scheduled, The Mountain Eagle will announce it on its website at www.themountaineagle.com and on its Facebook page.