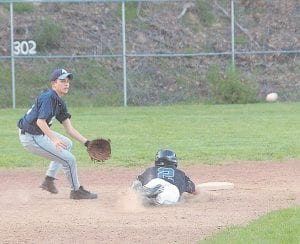 Letcher County Central pinch runner Michael Frazier dove back to second base to avoid being tagged out during a high school baseball game last week. (Photo by Chris Anderson)

In the first game, the Cavaliers were limited to one hit, a single by Chris Puckett in the fourth inning. Puckett represented one third of the Jenkins base runners as Jacob Gross and Stephen Stephens each drew walks. Gross also scored a run. Paintsville struck early with its offensive attack, scoring 8 of its 14 runs in the first inning.

In the second game, Morgan County no-hit the Cavaliers en route to a 12-1 victory. Jacob Gross, Chris Puckett, Justin Hunsucker, Jonathan Taylor, and Eric Grimm drew walks and Hunsucker scored on teammate Stephen Stephens’s reaching base on error. Gross and Puckett each had two stolen bases. This game was not out of reach for the Cavaliers in the early innings as they trailed 6-1 going into the 6th inning before Morgan County put the nail in the coffin in the form of four more runs in the 6th and two more in the 7th.

Jenkins 1 In their last meeting, the Cavaliers narrowly lost to the Commodores in extra innings by a score of 2-1. The much anticipated rematch took place Monday evening at the Cavaliers’ home field.

The Commodores drew first blood with a run in the top of the second, but the Cavs answered that run and tied the game when Justin Hunsucker drove in teammate Chris Puckett while reaching on an error. The Cavalier offense went on to struggle to find a groove and attack the Perry Central pitcher. The Cavs contained the Perry offense for much of the game until the Commo dore bats came alive and put up three runs in each of the final three innings of the game.

Matt Gross and Chris Puckett hit well on the day, both going 2-3 with two singles. In addition to their hits, Gross stole a base and Puckett scored a run. Justin Hunsucker came away with an RBI and Stephen Stephens drew the only walk allowed to the Cavaliers on the day.

The East Ridge Warriors took the early lead with a 1-0 top half of the first, but the Cougars struck back with a four-run effort in the bottom half of the inning, which included a homerun by Colton Cook, one of his three hits of the day.

In the second, the Cougars extended their lead with two more runs to 6-1 with the help of a Derek Walzer homer, before the Warriors brought some offense of their own with a four-run top of the third.

With their lead cut to one run, the Cougars struck again with three more runs in their half of the third to put themselves ahead for good. East Ridge threatened, scoring a run in the fourth and two more in the sixth, but that was not enough as the Cougars went on to tally 15 runs in the win at home.

Each Cougar batter hit safely in the game, with big games coming from Colton Cook and Aaron Wright. Cook was 3-3 on the day and was a triple shy of hitting for the cycle. He scored twice and drove in four runs. Wright was 3- 5 on the day with three singles, two runs, and an RBI.

The most difficult out for East Ridge had to be LCC’s Tanner Sexton, who was perfect on the day going 5-5 with four singles and a double. He also scored three runs and drove in two. Also of note is Derek Walzer, who went deep in the second inning.

The Cougars traveled across the state line to play Pound last week. The game was scoreless for three innings before the Cougars scored two runs in the top of the fourth inning.

Mike Watts was hit by a pitch and moved to third on a wild pitch and a Derek Walzer sacrifice before scoring on Colton Cook’s single. Chase Adams also drew a walk and was driven home by Cook. The Cougar offense did not stop for the remainder of the game, scoring seven more runs en route to a victory.

Colton Cook had an impressive day, going 2-3 with 2 singles, an RBI, and an incredible 6 stolen bases. Chase Adams drew three walks and stole four bases, while teammate McKenzie Smith was also walked three times and stole 3 bags. Aaron Wright and Mike Watts each had three singles and scored two runs on the day, while teammates Tanner Sexton and Derek Walzer each had doubles. Matt Adams and Tyler Dixon each reached base on walk with Dixon scoring a run.

The Cougars are currently enduring their first losing streak of the season, having lost three straight games last weekend in Madison Central’s Tomahawk Classic Tournament. They played a pair of games against the host school, losing 12-1 in the first game and dropping a 2-1 heartbreaker in the second. They also fell to Lafayette by a score of 12-2.