Cougars claw their way back to take first win 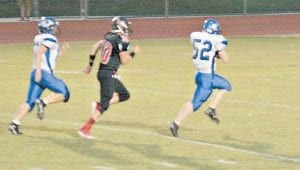 The Letcher County Central Cougars traveled to Lawrence County and defeated the Bulldogs by a score of 46-23 to come away with their much-needed first victory of the season. Letcher Central played their most complete game of the year, scoring the final 34 points of the contest.

LCC senior captain Chris Tyree was a force on both sides of the ball. He scored three rushing touchdowns on offense and defensively had three tackles for loss and forced an unbelievable four fumbles.

“Coach Rains did an excellent job scouting, and every defender had an assignment to stop their rushing attack,” said Tyree. “The whole defense did a great job staying in our lanes and it felt so good to win and get the monkey off our back.”

Letcher Central’s Ryan Alzuraqi returned the opening kickoff to the LCC 40 yard line. On the first play, quarterback Zane Blair found receiver Keaston Hall on a fade route for a 30- yard gain. LCC could move no further and eventually turned the ball over to Lawrence County on downs.

The Bulldogs used an option based running offense out of the Wing T and Power I formations and came out gaining huge chunks of yardage on their first possession. After rushing for three first downs Lawrence County was stopped on a third down play just short of the first down. They went for it on fourth down and Tyree blew the option play up in the backfield and not only caused a fumble, but also recovered it on the LCC 27 yard line.

The offense went three and out, but Blair had an excellent 44-yard punt to flip the field position. The Bulldogs gained two first downs on the ground and then ran an option play to the left side of their offensive line. Tyree hit Lawrence County quarterback A.J. Cyrus as he was trying to pitch the ball and LCC linebacker Keith Boggs plucked the ball out of the air and scampered 48 yards for the score. The extra point was no good, but LCC struck first and led 6-0.

On the first play of their next possession, the Bulldogs ran a fullback dive play and gashed the Cougars’ defense for a 70-yard touchdown score. The extra point was good, and just like that LCC found itself down 7-6.

Letcher Central’s running game then came to life. Running back Hunter Hall rushed for 26 yards on three carries. Facing a third and two, Tyree took a pitch around the right side and went 22 yards for the touchdown. The two-point conversion was no good, and at the end of the first quarter LCC was ahead 12-7.

Keith Boggs notched a quarterback sack to start the second quarter. Then on third and 22 Lawrence County botched a hand off and Alzuraqi recovered to give the Cougar offense great field position. Unfortunately the Cougars could not take advantage. On third down, Blair’s pass went through a receiver’s hands and was intercepted and returned 85-yards for a momentum-changing touchdown. Lawrence County ran in a two-point conversion and led 15-12 with 10:14 remaining in the second quarter.

On the first play of the next offensive possession, Blair slightly overthrew a receiver and was intercepted by the Bulldogs again. Cyrus kept the ball on an option play and broke three tackles on his way to a 42-yard touchdown run. The twopoint conversion was good and the score was 23-12 in favor of Lawrence County.

LCC started at its own 20- yard line and had its most important offensive drive of the game. Hunter Hall got the call on an isolation play and ran it up the middle for a 17-yard gain. Blair then connected with Keaston Hall for a 32-yard gain on a deep out pattern. Tyree ran a sweep around the left side of the line and dragged a Bulldog defender with him for a 19-yard gain. Two plays later Hunter Hall scored from one yard out. Tyree converted a two-point play and Letcher Central had cut the lead to 23-20 heading into the break.

Lawrence County started the second half with possession of the ball. On third and nine, LCC lineman Nick Mullins demolished Cyrus causing a fumble that was recovered by Cougar defensive back Paul Sokolowich. Blair found Houston Watts on wide receiver screen for a 13-yard gain. Then the Cougars ran a sweep to Hunter Hall who used his blocking beautifully to pick up 24 yards. Tyree scored on the next play from three yards and after failing on the two-point conversion LCC had regained the lead 26-23.

Tyree had a tackle for loss on the first Bulldog play of the next series and then sacked Cyrus on third down to force a punt. Josh Boggs blocked the punt and LCC took over at the Lawrence County 41 yard line. Hunter Hall caught a screen pass from Blair on the first offensive play for a 24-yard gain. Tyree ran up the middle for his third touchdown of the game from 17 yards out to make the score 32-23.

Lawrence County rolled the dice again on their next possession and went for it on fourth down and two from their own territory. They gave it to their fullback, but Keith Boggs stuffed the play at the line of scrimmage to get the ball back to the LCC offense.

Blair found Josh Boggs on a deep post pattern for a 33-yard gain and then facing fourth and goal from the six-yard line Blair found Houston Watts alone in the flat and he crossed the pylon for the touchdown. Tyree took a pitch in for the two-point conversion and LCC led 40-23 going into the fourth quarter.

On the second play of the fourth quarter, Cyrus went back to pass and was walloped by LCC lineman Willie Smith causing an incompletion. Cyrus was injured on the play and never returned to the game. Later in the drive, Lawrence County ran a sweep and Tyree devoured the ball carrier to cause a fumble that Keith Boggs pounced on at the Bulldog 43 yard line. Two plays later, Hunter Hall took a handoff and broke numerous tackles on his way to a 33-yard touchdown run. The score was the last points of the game and LCC won the contest 46-23.

Letcher Central had over 500 yards of total offense for the game and had two 100-yard rushers for the first time all season. The offensive line is really starting to mature and blocked well the entire game. Hunter Hall carried the ball 17 times for a season high 153 yards and two touchdowns. Tyree had 10 carries for 113 yards and three touchdowns. Blair completed 12 passes on 21 attempts for 186 yards and a touchdown. Keaston Hall had five receptions for 83 yards. Josh Boggs had two catches for 46 yards. Houston Watts had three catches for 27 yards and a score.

Zach Adams came back from injury to play his first game of the year and he made a huge difference for the defense. Adams had 10 tackles and his return let Keith Boggs move back to the defensive line and he was a force all night long. Boggs had three tackles for loss, a sack and recovered two fumbles including one he returned for a touchdown. Tyree forced four fumbles and had three tackles for loss. Stephen Fox and Kyler Lucas had seven tackles apiece. Every Cougar that played defense contributed in some way and it truly was a stellar team effort.

Coach Rains had to be proud of the way his team played. Letcher Central not only had their best offensive rushing output of the year, but also defensively took the opponents rushing attack away from them and held Lawrence County scoreless in the second half.

The Cougars host undefeated Russell County on homecoming night at 7:30 p.m. on Friday at Ermine.