The Letcher Central Cougars were home this past Friday night and hosted district rival North Laurel.

The Jaguars have fallen on some hard times of late and came into the game with a record of 0- 4. They are a big team with about 90 players on the roster, and are mainly a running team. The Jags were also 0-2 in the district with losses coming to Whitley County and Clay County.

The Cougars (3-1) have been pretty amazing the last few weeks. After opening the season with a loss to Hazard, they beat a good Greenup County team on the road and then came home to blow out district rival Perry Central. They followed that up by beating Clay County at Manchester 40-37 in a huge come-from-behind victory that gave the Cougars sole possession of first place in the district. With a win against North Laurel the Cougars would open the playoffs at home.

Playoffs, did you say playoffs? In only their third year of existence the Cougars are in the playoffs and are clicking on all cylinders at the right time. 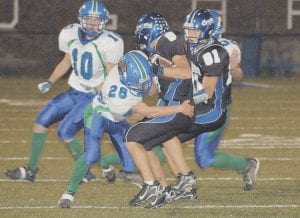 Letcher County Central wide receiver Chase Adams is tackled by a North Laurel defender. No. 81 for the Cougars is Stacy Phillips. (Photo by Chris Anderson)

It was a beautiful night for football as the Cougars ran through the power “L” which was formed on the field by the dance team and the band. They won the toss and deferred to the second half.

North Laurel would take the opening kick and return it to their 42-yard line. They looked nothing like a 0-4 team as they quickly moved to the Cougar 37-yard line. Aided by a pass interference call and two penalties for offsides against the Cougars, the Jags moved to the Cougar 14-yard line and a first down. After moving to the 8 on a run, quarterback Adrian Wardrup found Denver Tyree over the middle and just like that it was 7-0 Jags.

The Cougars would quickly drive to the Jaguar 15-yard line and from there quarterback Charlie Banks ran down inside the 10. But after connecting with Chase Adams on a pass to the 4- yard line, Banks lost the ball back at the 10. He fell on it, but the Cougars turned the ball over on downs with 2:58 left in the first quarter.

The Cougars were flat and the coaches saw that so they called time out. After the time out they forced the Jaguars to punt. They got great field position at the North Laurel 48-yard line, but the Jags stiffened up and drove the Cougars backward. Quarterback Charlie Banks was sacked twice and the Cougars were forced to punt.

Both teams would punt on their next possessions. North Laurel got the ball back late in the second quarter and after starting at the Cougar 47-yard line, the Jags faced a fourth-and-4 and decided to go for it. They made it and moved to the Cougar 36- yard line and a first down.

The Jags got another big pass interference call against the Cougars to move down to the 21-yard line with 2:47 left in the half. Wardrup found Cameron Cornett on a pass to the Cougar 2-yard line and they punched it in from there to go up 14-0 at the half as Cougar fans were stunned.

But just like last week, the Cougars came out of the locker room and said, “Now it’s our turn.”

After starting at the 27-yard line, Banks found Dakota Brock at the 47 with a pass. It was time for the ground game to come to life and come to life it did as Terry Tolson picked up 5 to the Jaguar 42 and a first down. Brock would rumble 15 yards to the 28 and Ben Fisher would get 10 more to the 18 yard line. Tolson then found a hole straight up the middle and it was see you later, touchdown Cougars.

But hold the phones. A flag would bring it back on a holding call. With the ball back on the 31- yard line, Banks found Brock with a pass to the 4-yard line. From there Banks would take the honor to score from 4 yards out. Colton Cook tacked on the extra point and it was 14-7 early in the third.

With new life the Cougar defense took over. The Jags fumbled the ball deep in their territory and big Richard Shepherd picked it up and took it home from 34 yards out and it was a new ball game. The point after was missed and the score was 14- 13 Jags.

The Jags would turn the ball back over as the Cougar defense held again and the offense was back on the field. Starting from their own 44, Tolson moved the ball out close to 50-yard line. Brock got 18 to the Jag 32 and Charlie Banks had a big 30-yard run to the Jaguar 2-yard line and a first and goal Cougars. Banks then made a beautiful fake to Ben Fisher and gave the ball to Dakota Brock for the score. He would tack on the 2-point conversion himself and the Cougars led 21-14.

North Laurel came right back at the end of the third quarter and moved to the Cougar 48-yard line. Charlie Banks would make a ferocious hit on the Jaguar running back on the next play for a loss of 2. The Jags would not be denied as they moved down to the Cougar 6-yard line. Denver Tyree took it in from there, but a Jaguar penalty brought it back to the Cougar 20-yard line. On a third-and-19 play, Wardrup found his target in the end zone and it was 21-21.

Can you say crunch time? But the Cougars have been good in the clutch all year and tonight would be no different. Starting at the 40 yard line, Banks found Stacy Phillips on a pass all the way down to the Jaguar 17-yard line. Ben Fisher picked up 3 yards and then Tolson exploded up the middle for 14 yards and the touchdown. The extra point was blocked and the score stood at 27-21 Cougars with 5:30 left in the game.

Any thoughts of a comeback were quickly put to rest as Charlie Banks intercepted Wardrup at the 48-yard line. The Cougars would get the ball back and try to run some clock. The Jaguars held and forced a punt. Caleb Frazier nailed it down on the Jaguar 12-yard line

With 2:19 remaining, the Jags went to the air and could find nothing but Cougar defenders. They turned the ball back over on downs and the Cougars ran out the clock.

For the second straight week the Cougars had clawed their way back to victory by coming back from a double digit deficit. Now the Cougars will have homefield advantage in the opening round of the playoffs as they move to 4-1 overall and 3-0 in the district.

It was a big night for the Cougar team and coaches as well as their fans. They will now move out of the district for their next game to take on a struggling Leslie County team Friday night at Ermine.