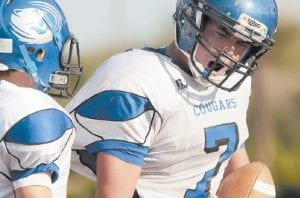 COUGARS BATTLE BUT COME UP SHORT IN OPENER — Letcher Central’s Keaston Hall (7) celebrated a second touchdown with Colton Collins in the second quarter of the Southwestern vs. Letcher Central game at Roy Kidd Stadium at EKU in Richmond on August 18. (Photo by Pablo Alcala/courtesy The Lexington Herald-Leader)

Letcher County Central head football Coach Paul Rains knew when he took the Cougars’ job that it was going to be a rebuilding process, but he still wants his team to play hard and show toughness for four quarters no matter what the score. If the first game of the 2012 season is any indication, the Cougars are going to have a great year.

Letcher Central lost a 24-20 nail-biter to Southwestern High School of Pulaski County on Saturday in the Roy Kidd Bowl at Eastern Kentucky University in Richmond. Southwestern made it to the semifinals in the 5A state playoffs last year and is now a perennial power.

Southwestern started the game with the ball and Chris Tyree set the tone for the defense when he clobbered Warrior quarterback Austin Smitty for a tackle for a loss on first down. On 3rd and 7, Nick Mullins tackled Smitty in the backfield and Southwestern was forced to punt.

Junior Houston Watts won the preseason quarterback battle for the Cougars and got the starting nod. On the second play of the possession, Watts couldn’t handle the shotgun snap and Southwestern recovered the fumble on the Cougar 31 yard line. LCC’s defense stood strong, and on 4th and 4 from the LCC 14, Southwestern ran a sweep around the left side. However, senior linebacker Tyree was there to meet the ball carrier in the backfield to give the ball back to the Cougar offense. On the first pass play of the season, Watts hit receiver Keaston Hall on a slant route for 37 yards to get the ball to midfield. Dylan Kincer fumbled on third down and the Warriors recovered on their own 41-yard line with just under four minutes left in the first quarter.

On the ensuing drive, Southwestern used its power running game to move into LCC territory. Running back Jordan Maggard gained 13 yards on 3rd and 2 and then Logan Campisano scampered 19 yards down to the Cougar 1 yard line. Chris Tyree stopped Campisano on 1st and goal to end the first quarter in a scoreless tie. Southwestern ran 17 offensive plays compared to six for the Cougars and controlled much of the first quarter clock.

The Warriors’ Jared Whittle scored on a fullback dive on the first play of the second quarter. The extra point was no good and LCC found itself down 6-0 with 11:54 left in the half. An intentional grounding call against the Cougars made it 3rd and 28 from the LCC 1 yard line, but Watts found running back Hunter Hall on a screen pass for 13 yards to give LCC room to punt. (While covering the punt Watts turned his ankle and did not return to the game.)

Southwestern took over in great field position, but fumbled on the first play and junior linebacker Chaz Bryant recovered. Zane Blair, who is 6’4”, entered the game at quarterback for the Cougars and quickly found Keaston Hall on a 51-yard bomb to get deep into Warrior territory. The drive stalled, however, and the Cougars were forced to give the ball up on downs.

On second down, Southwestern fumbled and Nick Mullins recovered on the Warrior 10. Blair connected with Keaston Hall on a fade pattern for the first LCC score of the year. The extra point was no good and score was tied 6-6 with 6:54 left in the opening half. Southwestern went three and out and the Cougars started their next offensive possession on their own 37-yard line where Blair found tight end Dylan Kincer on a seam route for a 34-yard gain. Keaston Hall caught a 24-yard touchdown from Blair on second down and after the two-point conversion was no good, the Cougars had their first lead of the year, 12-6, with just over three minutes left in the second quarter.

Tyree sacked Smitty on first down, but Southwestern converted a third and long to get to midfield with 1:38 on the clock. The Warriors took their final timeout with 12 seconds left on the Cougar 33 yard line, where Austin Smitty rolled to the right and ran out of bounds with one second remaining after he could find no open receiver. On the fi- nal play of the half, Smitty found Devon Baker in the end zone on a Hail Mary play for the score. Tyree blocked the extra point and at halftime the score was tied 12-12.

Other than allowing the Warriors to score on the Hail Mary passing play, the first half had many positives for the Cougars. Their defense held Southwestern to just 107 yards of total offense. Chris Tyree had seven tackles including three for loss and a sack. Nick Mullins had two tackles for loss and a fumble recovery. Ryan Alzuraqi was all over the field and had six first half tackles for Cougars. On the offensive side of the ball, Zane Blair completed five passes on eight attempts for 126 yards and two touchdowns. Keaston Hall had four catches for 122 yards and two scores.

The third quarter was a defensive struggle in which neither team scored until the closing minutes when Southwestern finally mounted the first significant drive of the half.

Early in the fourth quarter, Southwestern’s Smitty scored on a 12-yard run around the left side of the offensive line. The Warriors tried to fake the extra point, but did not convert and LCC found itself down 18-12.

Southwestern quickly got the ball back and running back Logan Campisano found pay dirt from 11 yards out to make it 24-12 in favor of the Warriors midway through the fourth quarter. Resilient LCC came back to mount by far its best offensive drive of the second half. Zane Blair connected with Keaston Hall from 33 yards out for the third touchdown of the game with 2:30 left. Blair found Keaston Hall on the two-point conversion and the young LCC Cougars had fought their way back to 24-20. Letcher Central’s attempt at an onside kick was unsuccessful and Southwestern ran out the clock to secure the hard fought victory.

Coach Rains’s first game at the helm for the Cougars was not the prettiest game, but with seven seniors on the roster fans can expect this LCC team to get much better from week to week.

The defense played phenomenally and was led by Ryan Alzuraqi’s 15 tackles. Chris Tyree and Nick Mullins spent most of the game in the backfield wreaking havoc with Warrior ball carriers.

On offense Keaston Hall had an unbelievable game, hauling in seven passes for a career-high 180 yards and three touchdowns. The main problem for the young Cougars was turnovers, a problem Coach Rains will certainly address before Friday night’s contest against Breathitt County in Jackson at 7:30 p.m.