How about those Cougars? The boys from Ermine racked up two more victories last week, beating Knott Central and Owsley County.

The Cougar boys have improved to 14-9 after starting the season 1-4. They are the fifth best three-point shooting team in the state, hitting 126-306. Josh Proffitt is ranking No. 12 in the state in shooting the trey.

The Cougars have improved to 4-4 in the all-important district race. Their remaining games are against Hazard on the road and then they will host Wolfe County and Powell County to close the regular season.

Against Knott County last week the Cougars needed a big win on the road and they got it against a Knott County team that had beat them earlier at Ermine on a last second shot. But this was another night and this was at Knott County.

The Patriots, led by Player of the Year nominee Stuart Stamper, have been a good ball club overall this year with some big wins over Perry Central, Cordia, and Breathitt County. Against the Cougars it would be a foul fest as the referees needed new whistles after the game. With a total of 76 foul shots by both teams, it was a long night for fans. Letcher Central shot 33 free throws and made 26 of those for 78 percent, while Knott County shot 43 free throws and made 28 for 65 percent. 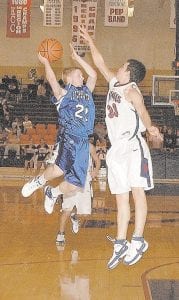 This was definitely the difference in the game as the Cougars went on to pull out another hardfought win 76-72 and shock the Patriot faithful. Knott County missed 15 free throws on the night and the Cougars missed 6.

I think the Cougars have gotten better as the season has gone along because players understand their roles better and they are more confident in each other and what each player brings to the table. The Cougars placed four players in double figures against the Patriots led by Devon Blair with 18 points, 7 rebounds, 4 assists, and 4 steals. That’s a big stat sheet any time, but especially in a district game on the road. Charlie Banks also had 18 points and 6 rebounds. Malachi Longworth had 10 points in 15 minutes of action before fouling out late. The surprise of the night was James Gose, who came up with 10 points and 2-3 from behind the arc. 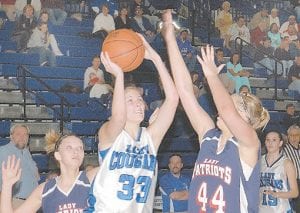 The Cougars only made 4-12 from treyville in an unusually off night for them. Jordon Reynolds had another solid game inside with 9 points as he hit 5-6 from the charity stripe and also had 5 rebounds before fouling out. Chase Adams would hit for 5 points, Josh Proffitt had 3 as he was shut down for the first time in a long time from behind the arc. Brian Roark hit 2-2 free throws and Ryan Brock hit 1-2 to round out the scoring. Knott County got 36 points from Mr. Stamper as he hit 10-18 from the field and 12-17 from the line.

After leading 33-27 at the break, the Cougars poured it on in the second half to roll to another win. It was Devon Blair leading the way again as he hit for 20 points. Charlie Banks and Jordon Reynolds also were in double figures as Banks hit for 16 and Reynolds hit for 13. Malachi Longworth and Josh Proffitt were right behind with 9 each. Ryan Brock had 5 and James Gose and Chase Adams finished with 2 each as the Cougars improved to 14-9.

The Lady Cougars won one and lost one last week as they hosted the Lady Patriots of Knott County and the Lady Bulldogs of Hazard.

The Lady Cougars got big games from Brittany Sexton with 17 and Shannon Bays with 10. Sharaye Kincer had 7, Morika Begley had 4 and Wynn had 2 as the Lady Cougars fell to 7-14 and Knott County improved to 15-7.

The Lady Cougars came back with a big win on Saturday night as they crushed Hazard 52-31 to improve to 8-14.

The Lady Cougars are led in scoring by Brittany Sexton with 19 points per game and 6 rebounds. She is followed by Sharaye Kincer with 12 points and 8 rebounds. Shannon Bays averages 11 points and 7 rebounds.

The Lady Cougars are fourth in the state in three-point shooting as they have hit 51-141 led by Sexton with 46-117. They are also 3-3 in the district.

They will close out the regular season against Owsley and Estill County at home, and then go on the road to take on Wolfe County and Leslie County.