Cougars could get advantage

Whitley County was shocked this past weekend as it traveled to Perry Central and was beaten handily by the Commodores (56- 42). If the Cougars win the game at Whitley County they will go into the playoffs with the top seed and home field advantage in the playoffs. They already will host the first round at home, but it would be nice to stay at Ermine a little longer.

The rest of the district is a toss-up. Clay County, Whitley County, and Perry Central all have identical records after this week’s action. They are each 2- 3 overall and 1-1 in the district. North Laurel is 0-6 and 0-5 in the district. 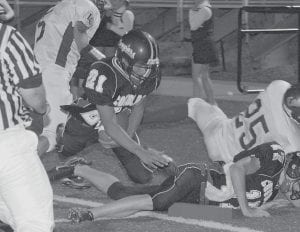 FINDING THE ENDZONE – The Letcher County Central Cougars won easily over Leslie County last Friday night and will win the home field advantage in the play-offs if they win again this week. (Photo by Chris Anderson)

The Cougars have had a balanced attack this year with junior quarterback Charlie Banks really coming into his own. He has established himself as a huge threat on his feet as well as through the air. He has connected on 57-96 passes for 861 and 6 touchdowns. On the ground he trails only senior Dakota Brock in rushing as he has totaled 261 yards and 9 touchdowns. He also has tacked on three two-point conversions.

On defense the Cougars are led by big junior Caleb Frazier with 33 tackles and 15 assists followed by sophomore McKenzie Smith with 27 tackles and 5 assists.

The Cougars hosted the Leslie County Eagles this past Friday night on the weekend of the Mountain Heritage Festival. It was another nice night for football. The weather was actually chilly later in the game.

The Cougars have been slow to get out of the gate to start most of their games, but they would take their first possession down the field and quarterback Charlie Banks scored from 6 yards out to start the scoring. It looked like it would be a shoot-out as Leslie came right back and scored on its first play from scrimmage as J. Morgan scored on a 68-yard play and it was 7-7. The score would stand at the end of one quarter.

The second quarter would see Banks connect on a beautiful 43-yard pass to Dakota Brock that Brock made an over-the-head catch on. He sailed into the end zone and it was 14-7 Cougars.

Banks got back in on the action as he would score twice before half-time and the Cougars led 28-7 at the break. The Cougars would add to their total after the break as they manhandled the Eagles and win going away 49-13.

Charlie Banks hit on 16-25 passes for 212 yards and two touchdowns. He also ran 9 times for 114 yards and three touchdowns to lead a balanced attack for the Cougars.

With only four games remaining in the regular season, the Cougars are becoming a force to be reckoned with and may surprise some people in the playoffs.