Cougars drop to No. 8 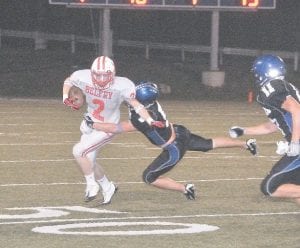 COUGARS LOSE HEARTBREAKER — Letcher County Central defensive back Dustin Brown swooped in from the side to take down a Belfry runner during the Cougars’ 24-20 loss to the Pirates on homecoming night. The defeat caused Letcher Central to drop three places in the AP’s Class 5A poll, to No. 8. (Photo by Chris Anderson)

The Letcher County Central Cougars fell three positions to No. 8 in the latest Associated Press Class 5A prep football poll after suffering their first loss of the season on Sept. 11.

Last Friday’s game was everything it was built up to be — the game of the year coming in the first half of the season for the Cougars.

The Belfry Pirates and Coach Phillip Haywood and their storied tradition came to Ermine to take on Coach Hillard Howard and his Letcher Central Cougars on homecoming night.

These two legendary coaches tangled many times when Howard was at Pikeville, and the battle continued this past Friday evening.

The Pirates came in with an unusual 1-2 record in the early part of their season, while the Cougars were riding a winning streak at 3-0.

Belfry may have been 1-2 but they are still Belfry, and that’s all I’ll say about that. I had heard that Belfry was down, but like all good teams it is not down it is just reloading, and this was the perfect time for the Cougars to notch another win on their belt.

The Cougar stadium was packed and Letcher Central won the coin toss. They elected not to defer until the second half like they had the first three games. They wanted the ball first and they got it.

The Cougars started at the 16- yard line. On the first play from scrimmage, Jesse Rose came around on a reverse and moved all the way to the Cougar 43 for a first down. Out near mid-field, the Cougars faced a fourth down by inches and elected to go for it.

The Pirates were all over it and stopped the Cougars for no gain. They took over on downs. The Cougar defense returned the favor as they stopped the Pirates and forced a quick three-and-out and a punt.

It was a tale of two defenses early on as the Pirate defense forced another Cougar punt. This time the Pirates put together a drive. Belfry and Varney moved to the Cougar 40 and then to the 35. Varney is the man for the Pirates and he does everything but sell popcorn.

After Belfry was running on every play, the Cougars were caught napping on the next play as the Pirates quarterback found a wide open receiver down on the Cougar 15 for a huge first down. But the wheels fell off on the next play for the Pirates as the ball was bobbled and Cougar senior Dustin Brown picked it up and rambled 85 yards for the touchdown.

The extra point was tacked on by McKenzie “Hitman” Smith and the Cougars led 7-0 with 2:39 left in the first quarter.

The Pirates came right back and Varney scored on a long run, but it was called back on an illegal block in the back by the Pirates. The ball was at the Cougar 24. Belfry turned to its big tight end Runyon as he moved the ball to the 18 and, after a Cougar penalty, moved the ball to the 9-yard line. Runyon would bull his way to the goal line for a Pirate touchdown. The score was knotted at 7-7.

The Cougars returned the ball out to the 32, but a fumble gave the ball right back to the Pirates and one thing you can’t do against the Pirates is turn the ball over because they will take advantage of it quickly — and they did just that.

Behind Varney, the Pirates moved down to the Cougar 6-yard line and he took it in from there for a 14-7 Pirate lead. Varney also kicks extra points.

The Cougars came right back and sophomore Logan Johnson hooked up on a big pass down to the Pirate 21 and then again down on the 10. But with 7:38 in the half, the Cougars turned the ball over again. The ball was snapped over Johnson’s head and the Pirates recovered.

Varney quickly found a hole up the middle and he was off to the Cougar 10 before you could say turnover. The Cougar defense tightened up and forced a Varney field goal, but the Pirates had scored again off a Cougar turnover. It was 17-7 Belfry.

The Cougars came back and were unable to move after a kickoff return to the Belfry 43 by senior Chase Adams. The Cougars faced a fourth-and-8, but instead of punting they went for it and Johnson connected with senior Ryan Brock for a huge first down.

Johnson took over and rambled down to the 16 on a keeper. He did it again and moved all the way to the 5-yard line. He called his own number and took it in from there and after the Smith extra point it was 17-14 Pirates.

The Cougar defense held the Pirates on the first possession after halftime and forced a punt. The Cougar offense got the ball and quickly moved on the ground with Brown, Rose and Collins picking up huge chunks of yardage. They moved to the 2-yard line of Belfry, but the Pirates stopped the Cou- gars on a fourth-and-goal and got the ball inside their own one-yard line. Varney wasted no time as he moved out to the 6, but the Cougar defense forced a punt. Adams returned to the Pirate 45-yard line and the Cougars were in good shape.

After picking up 4 yards on first down, it was time for the old trick play again. It had worked twice before so why not again? Johnson pitched back to Nathan Maggard and Maggard launched a missile to Robbie Huff all the way down on the Pirate 3-yard line and a Cougar first and goal. Dustin Brown got the honors as he scored his second touchdown of the night and the Cougars had come back to take the lead 20-17. The extra point was blocked.

The Pirates came right back and moved inside Cougar territory at the end of three quarters. The fumble bug hit the Pirates this time. Runyon fumbled on the next play and the Cougars had the ball at their own 45-yard line.

They could not get anything thing going and were forced to turn the ball over on downs at mid-field. They forced Belfry to do the same, and got the ball back as the clock started to become a factor with three minutes left in the game.

The Cougars were down near the Pirate 35 when disaster struck. The ball was fumbled and the Pirates recovered and had one last shot with less than two minutes in the game.

The Cougar defense would have to come up big again. Starting at their own 25, it took one play as Varney found a hole and he was off all the way to the Cougar 30- yard line with 1:16 left in the game. And then, as the Belfry quarterback was scrambling for his life, he found a wide open receiver in the end zone. Varney’s extra point made it 24-20 Pirates with less than a minute in the game.

The Cougars would get their shot. After a huge return to the Pirate 41 by Jesse Rose, the Cougars quickly moved to the 35. Two incomplete passes set up a fourth down play.

Johnson picked up a first down but the clock was running out. The next play was a desperation pass to the end zone and it was picked off by the Pirates. The final score stood at 24-20.

What a game it was. The Cougars had their chances but the three turnovers by the Cougars were turned into points by the Pirates. The Pirates improve to 2-2 and the Cougars fall to 3-1. Coach Haywood got this victory and Coach Howard will have to wait for another shot at the Pirates.

The Commodores completely manhandled the Breathitt County Bobcats in Jackson this past weekend, so things do not get any easier for the Cougars.