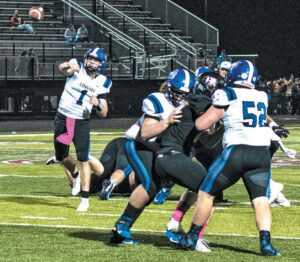 Letcher Central quarterback Carson Adams passes the ball while receiving blocking assistance from teammates Scott Pack and Christian Griffith. Adams accounted for seven combined touchdowns to lead a Cougars offense that outgained Harlan County by 439 to 206 yards of total offense in a 51-14 win on the road. (Photo by Chris Anderson)

The Letcher County Central Cougars improved their season record to 6-1 — and even more importantly 2-0 in district play —with a convincing 51-14 victory over the Harlan County Black Bears last Friday.

Carson Adams accounted for seven combined touchdowns to lead a Cougars offense that outgained Harlan County by 439 to 206 yards of total offense.

Harlan County received the opening kickoff and returned it to their own 37-yard line. After gaining one first down, the Black Bears fumbled on a running play and the ball was recovered by LCC defensive lineman Cooper Bailey. On the first LCC offensive play, Harlan County defender Ethan Rhymer made a leaping interception to give the ball right back to the Black Bear offense.

After a Harlan County punt, Adams connected with receiver Jonah Little on a third-and-17 play for a 16-yard gain to set up a fourth-and-short. Adams ran up from the shotgun formation and got the snap from under center and gained three yards on a sneak. Three plays later, Adams completed a pass on a deep out to Little who broke a tackle and then ran down the sideline for a 41-yard touchdown. The extra point was wide right to keep the score at 6-0 in favor of the Cougars. 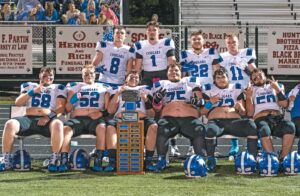 Harlan County used a methodical 11-play 70-yard drive in which every play was a running play. The drive was capped off by a three-yard touchdown run by Demarco Hopkins. Hopkins also ran in the two-point conversion to give Harlan County an 8-6 lead early in the second quarter.

On the second play of LCC’s next drive, Harlan County intercepted a tipped pass and returned it to the LCC 46-yard line. Harlan County then went for the first down on a fourth-and-one, but the Hopkins run up the middle was stuffed by LCC linebacker Keaton Day in the hole for no gain and a turnover on downs.

With LCC again in possession of the football, Isaac Matthews gained 12 yards on a sweep run around the left side of the line to get the drive started. Then, Adams faked a handoff and sped away from defenders for a 59-yard touchdown run. He also ran in the two-point conversion to give LCC the lead at 14-8.

Unable to do much after taking the ensuing kickoff, the Black Bears went for the first down again on a fourth and short play from deep in their own territory and Keaton Day again blew up the play again in the backfield to force a turnover on downs.

Adams capitalized on the great field position and scored on a quarterback keeper from seven yards out. Adams also converted the two-point conversion to increase the Cougars lead to 22-8.

With the ball again in the possession of the Black Bears, the Cougars defense forced a three and out. On the first play from scrimmage, Adams used a play action fake to find a streaking Nicholas Haning for a 62-yard touchdown completion. Carson Adams scored a two-point conversion on a quarterback keeper to make the score 30-8.

The Cougars increased the lead to 36-0 after Haning ran right by a Black Bears defender one more time on a deep route where Adams found him open for a 45-yard touchdown right before halftime. LCC’s lead was boosted to 38-8 after Alex Blair caught a two-point conversion pass from Adams.

LCC took the second-half kickoff and quickly scored on a 26-yard run by Adams, which made the score 44-8 and led officials to institute a running clock for the remainder of the game.

After yet another Black Bear punt, Hayden Brashear took a swing pass from Adams and broke two tackles on his way to a 49-yard touchdown. The score was 51-8 after Jonah Little made the extra point.

Harlan County scored a touchdown late in the contest to make the final score 51-14.

“The defensive stops on fourth down really changed the momentum,” said LCC Coach Junior Matthews. “The defense played well other than a couple of drives early. Our offense was really good other than the two turnovers early in the game.”

The LCC defense was led by Koby Johnson’s 13 tackles. Keaton Day had 12 tackles in addition to the key fourth-down stops early in the contest. Nicholas Haning had 10 tackles. Jackson Meade and Trevor Branham had nine tackles each for the Cougars.

Letcher Central travels to Clay County this week with the kickoff scheduled for Friday at 7:30 p.m.