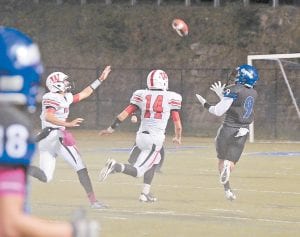 Letcher Central receiver Aaron Thomas, a senior, was open to haul in a long pass in Friday’s 42-27 loss to visiting Whitley County. The Cougars will try to even their record when they play their final regular season game this Friday against visiting Union, Virginia. (Photo by Chris Anderson)

The Letcher County Central Cougars fell to district foe Whitley County 42-27 to drop to 4-5 on the season, including 1-3 in district play. This was the Cougars’ first game without star runningback Jaylyn Williams who will miss the rest of the year with an ankle injury that occurred during the Cougars’ last game against North Laurel.

LCC started the game with the ball at the 44 yard line after a failed Whitley County onside kick attempt. The offense went backwards on three plays and the punt was downed close to midfield.

The Cougar defense swarmed to make two tackles and a third down incompletion forced the Colonels to punt, which rolled to the LCC six yard line.

Preston Maggard got three straight carries from the fullback position and grinded out tough yardage on each play to give the Cougar offense a first down at the 17 yard line. On the next play a holding penalty negated a 15-yard run by quarterback Nick Sergent. The drive stalled and LCC punted for the second straight possession.

A Tristan Polly tackle for loss was followed by running back Nathan Jackson catching a swing pass and racing down the sideline for a 22-yard gain. Two plays later quarterback Luke Woods scored from 34-yards away on read option keeper. The extra point gave Whitley County a 7-0 lead late in the first quarter.

The Cougars started the next drive with Sergent gaining 21 yards on a sweep play around the right side of the line. A holding penalty forced a second and long, which Sergent threw a check down pass to Quade Adams for a 22-yard gain. Sergent was sacked on 3rd and 1 and the Cougars had to punt again early in the second quarter.

Triston Polly sacked Woods from behind forcing a fumble recovered by Preston Maggard at the Colonel 15 yard line.

The LCC offense struck quick and scored a touchdown on a 10- yard pass from Sergent to Avery Stamper. Holbrook connected on the extra point to tie the game at seven.

Whitley County capped off a seven-play, 80 yard scoring drive with a 27 yard touchdown pass from Woods to Dawson Swain on a go route. The Colonels retook the lead 14-7 after the extra point split the uprights.

Gage Issac gave the LCC of- fense great field position after a 52-yard kickoff return. On the first play the pass was tipped up into the air and intercepted at the Whitley County seven yard line.

The Colonels quickly moved the ball down the field and went for it on fourth and 15 at the LCC 32 yard line. Woods connected with Jackson on a wheel route out of the backfield for a 30-yard gain. Woods scored on a two-yard run and the extra point made it 21-7 Whitley County.

Quade Adams had a nice 19- yard run to move the ball into Whitley County territory. Sergent got sacked on fourth down and the Cougars turned the ball over on downs.

Woods scramble left and threw back to a wide open Swain for a 32-yard touchdown and the extra point made the score 28-7 at halftime.

Whitley County got the ball to the start the second half. On fourth and six, the Colonels faked a punt and Woods gained 36 yards on the play. Then on fourth and 15 Woods completed a 21-yard touchdown pass to Tyler Downs on a corner route. The score was 35-7 after the point after was good.

Quade Adams caught a pass from Sergent and broke two tackles and pulled a defender for a 21- yard gain. Two plays later Adams ran it in from five yards out. The extra point was no good but LCC cut the lead to 35-13.

On third and long Adams intercepted the Woods pass near midfield.

Sergent used an excellent play action fake and found Thomas on a 48 yard streak route to the two yard line. Adams scored two plays later but the two-point conversion was no good to keep score at 35-19.

Aaron Thomas intercepted a Woods pass on the last play of the quarter after Whitley County had moved the ball to the LCC red zone.

Sergent gained 17 yards on a quarterback keeper. Then LCC used the same reverse play fake to Gregory Kincer and Sergent found Thomas for a 38-yard touchdown. Quade Adams ran in the twopoint conversion to continue the rally and make the score 35-27.

The Colonels answered quickly with a 68-yard run by Woods to the LCC three yard line. Woods took it in a play later and the extra point increased the lead to 42-27.

On fourth and five, Sergent threw a wide receiver screen to Leyton Polly for a 16-yard gain. Then Sergent connected with Kincer on a 24-yard gain on a post pattern to the Colonel 20 yard line. On the next play Whitley County intercepted the pass in the end zone . e Colonels offense melted

Th away the rest of the clock for a tough fought 42-27 victory.

The Cougars will look to build on the second half performance and win the last regular season game when they host Union, Va. this Friday at Cougar Field.