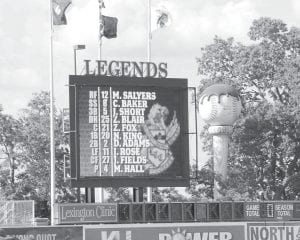 IN THE LIGHTS — Members of the starting lineup for the Letcher County Central Cougars were featured on the scoreboard at Whitaker Bank Ballpark in Lexington before the start of Monday’s state tourney contest between the Cougars and Henderson County. The Cougars fell, 11-1. The park is home to the Kansas City Royals’ Class A minor league affiliate, the Lexington Legends. (Photo by Tonya Aslinger)

The Letcher County Central Cougars baseball team had its magical season end Monday night at Whitaker Bank Ballpark in Lexington with an 11-1 loss to the Henderson County Colonels.

The Cougars have nothing to be ashamed about as they fought hard the entire contest and never gave up. Henderson County is the defending runner-up in the state tournament and currently ranked in the top five in the state.

The Cougars had a strong following of fans accompany them to the game and following a slow start marred by walks and passed balls found themselves down 5-0 heading into the top of the fourth inning. That is when the Letcher Central offense provided their lone rally of the game. Senior Jordan Short led the inning off with a single to right field. Designated hitter Zane Blair followed with a walk and after a strikeout to the next batter, first baseman Nick King drew a walk to load the bases. Henderson County pitcher Marty Coursey was clearly rattled and Dakota Adams capitalized with a five-pitch walk that brought in Jordan Short to cut the lead to 5-1. Unfortunately, the next two LCC batters struck out and the rally was thwarted.

The Cougar offense could get only one more player in scoring position the rest of the game and eventually lost the game 11-1 in six innings.

LCC is a very young team and will take this result as a learning experience and come back better next year. Short finished his exceptional career with two hits. The only other senior on the team Caleb Baker made the defensive play of the game in the third inning when he made a diving stop at his shortstop position and flipped it to second baseman Adams who made a barehanded catch to get the Cougars out of a bases loaded jam.

Letcher Central finished the season with a 29-11 record. Henderson County improved to 30-8.