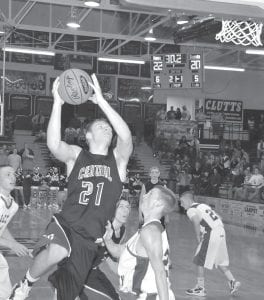 Letcher Central junior Koree Stewart powered his way to the rim during the Cougars’ opening-round 14th Regional Tournament win over Lee County last week at Hazard. Stewart fouled out in the game, but not before contributing 12 points to the Cougars’ 54-41 win. The Cougars fell to Perry Central in the next round, 37-34. (Photo by Chris Anderson)

In a very deliberate, low-scoring 14th Regional tournament semifinal matchup March 7, the Letcher County Central High School Cougars used a solid defensive effort to lead Perry County Central for most of the game before the sixth-ranked Commodores rallied at the free throw line in the final three minutes to edge the upset-minded Cougars.

Sophomore center Mat t Neace’s trey with nine seconds left in the first half was negated by seventh-grader Braxton Beverly’s 30-footer at the buzzer, but LCCHS led PCCHS 12- 10 at the half. Beverly, who came off the bench, fouled out late with a game-high 12 points.

In the first half, both teams were just four-for-14 (29 percent) in field goal attempts with the ‘Dores just two-of-nine from behind the arc.

In the third quarter, the teams were tied twice before senior Brian Roark’s layup gave the Cougars the lead at 16-14 with 5:40 left in the third. The Cougars ended the quarter with a 7-3 spurt to extend their lead to 23-19 heading into the final quarter.

Junior center Koree Stewart’s post-up pushed LCCHS’s lead to 27-21 with 5:25 left, and proved to be LCCHS’s final basket of the game.

With 2: 28 left, Brian Roark made one of two free throws and LCCHS still led 30-25, but PCCHS took advantage of a pair of LCCHS turnovers to cut the Cougars’ lead to 30-29 on junior Kyle Huff ’s pair of free throws with 2:05 left.

After Logan Johnson missed a pair of free throws, junior Trevor Combs hit a short baseline jumper and PCCHS reclaimed the lead at 31-30, with 1:12 left. Combs, who finished with eight points for the 24-5 Commodores, made four straight free throws down the stretch to preserve the victory and to move PCCHS into last night’s championship game.

For the game, LCCHS shot 36 percent on 10-of-28 field goal attempts. PCCHS finished with 34 percent for the game on 12-of-35 from the floor — including just two-of-19 from behind the arc.

Cody Gregory’s 11 points led the Cougars who wrapped up a 21-12 season that included a 17-4 mark over the last two months of the season.

The Cougars survived early shooting woes to rally in the final quarter to defeat the 56th District champion Bobcats in the opening round of the 14th Region tournament at Hazard on March 2.

Senior guard Brian Roark’s trey gave LCCHS an early 3-2 lead, but Dontarius Pittman, a 6’ 5” senior forward who entered the game with a 15 points per game scoring average, scored eight of Lee County’s next 10 points and the Bobcats led LCCHS 12-8 heading into the second quarter.

Junior center Koree Stewart’s post-up tied the game 12-12 at the 4:59 mark of the second quarter, but the Bobcats responded with a run of five unanswered points for a 17-12 lead with just over three minutes left in the first half. Sophomore guard Cody Gregory’s pair of free throws gave LCCHS its second lead of the game at 20-19 with 1:15 left before intermission and Stewart’s layup tied the game at 22-22 at the intermission.

Roark’s pair of free throws after Pittman’s fourth foul and Roark’s subsequent steal and layup, gave LCCHS a 30-24 lead with 4:15 left in the third quarter.

Despite Pittman’s seat on the bench, the Bobcats responded with a 13-4 run to take the lead at 37-34 heading into the fourth quarter.

Pittman returned to start the fourth quarter, but junior guard Logan Johnson, who picked up his third and fourth fouls in the first two minutes of the final quarter, stayed on the floor and his second of four baskets gave the Cougars the lead for good at 38-37 with 6:20 left to play. LCCHS’s defense forced the Bobcats into three turnovers in four possessions over the next three minutes, and Johnson’s fourth basket at the 1:55 mark extended the Cougars’ lead to 47-39. Johnson finished with a double-double of 14 points and 10 rebounds.

Over the final 90 seconds, LCCHS converted seven-of-10 from the charity — including four-of-four by Roark who finished with a game-high 18 points and six rebounds. Stewart, who fouled out late in the game, also finished with a double-double of 12 points and 12 rebounds.

The 13-16 Bobcats helped offset their 38-26 rebounding deficit by forcing the Cougars into 16 turnovers while making only 12 turnovers themselves — however four of the Bobcats’ turnovers resulted in the Cougars’ crucial offensive spurt midway of the fourth quarter that saw LCCHS stretch its lead out to 10 points with less than two minutes to play.

Cody Gregory finished with six points for the 21-11 Cougars. Kendall Ballou and Matt Neace wound up with two points each.

In recognition of their outstanding play during the regular basketball season at Letcher County Central High School, Brian Roark, a senior, and juniors Logan Johnson and Koree Stewart were named to the All-53rd District Team.