Cougars fall short in semifinal, end season with record of 24-9 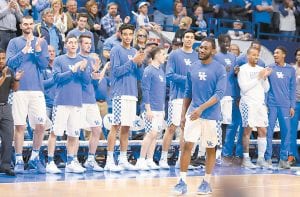 The Letcher County Central Cougars, helped by Perry County Central’s poor free-throw shooting down the stretch, closed to within three points of the Commodores late in the fourth quarter of Monday night’s 14th Regional Tournament semifinal tilt, but fell short, 57-50.

The Cougars scored three straight three-point field goals while Perry Central missed six straight foul shots to cut the lead to 53-50 with 16.5 seconds left in the game. However, two Commodore free throws, a steal and a dunk put Perry Central in the lead for good as time on the clock expired.

Each of the Cougars’ three seniors — Austin Banks, Torell Carter, and Austin Caudill — scored treys late in the final quarter as they tried desperately to keep their final season alive. For the 2016-17 season, the trio led the Cougars to a won-loss record of 24-9, best in the 53rd District and third best in the 14th Region, behind Perry Central and Estill County.

After beating Knott Central for the district title, the Cougars of Coach Robert Hammonds defeated Powell County in the regional tourney opener last Monday night, 82-68, to advance to this week’s semifinals.

Letcher Central’s leading scorer in that game was also Carter, who burned the nets for 38 points. Banks poured in 18 points in the opener, while Kincer contributed 13 points. Raglin scored seven points, followed by Trevor Hardin’s three points, and one point each from Caudill and Caleb Stidham.