The Letcher Central Cougars took on two of the top teams in the region this past week as they hosted Cordia and June Buchanan.

Cordia always has a tough and physical team and this year is no different. The Cordia team traveled to Ermine riding a five-game winning streak with a record of 10-4. And as usual, they have a player named Hurt. In the past there were Josh and Matt and now there is Zack. He is a very solid player and Cordia’s biggest weapon, but he is not the only weapon.

The Cougars (9-7) were fresh off a big win over Estill County. This game saw Josh Profitt hit 9- 9 from the field and 7-7 from the line. The Cougars had won three in a row and were looking to make it four.

Cordia had beaten the Cougars earlier 66-58 at Cordia. The Lions opened the game with a lay-up inside by their big man Taylor and led 2-0. The Cougars answered as Malachi Longworth hit a little runner down the lane and it was 2-2. Hurt answered right back for the Lions and the race was on. 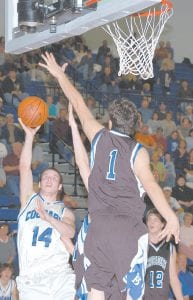 After Charlie Banks scored from 10 feet, the Cougars went up by 4 but Cordia tied the score at 8. The Lions went on a run after they nailed a trey and scored on a lay-up by Hurt. They led 15- 10.

The Lions kept Josh Profitt bottled up all night so the Cougars pounded the ball inside. Banks and Devon Blair both scored inside to pull the Cougars within one at 15-14. Cordia led after one, 16-14.

Eric Ison entered the game at the beginning of the second quarter and the 6’8″ Cougar big man took over. He quickly scored to make it 16-16. He would later get a block that set up a Cougar run out and a lay-up by Longworth to give the Cougars a 20-16 lead.

It was tied at the half 33-33 and the fans from both sides would really get their money’s worth in the second half. The score went back and forth as Cordia answered whatever the Cougars did. Taylor and Hurt both were pretty much unstoppable, but the Cougars kept it close and trailed after three, 51- 46.

Jordon Reynolds was fouled to open the fourth quarter and made both shots. After a steal by Blair and a 15-footer by Longworth, it was 51-50. After a Cordia turnover, Banks would score inside and the Cougars had the lead 52-51.

Then Cordia’s other guard, Mosley, nailed two straight treys and suddenly the Lions led by 5 at 57-52. Josh Profitt answered with a big trey on the Cougar end for his first points of the night. Banks scored twice inside to give the Cougars the lead at 59-57. Hurt answered with his 20th point.

It was crunch time as Jordon Reynolds powered his way inside for 2 and Charlie Banks got 2 more and it was a 63-59 Cougar lead. Hurt got two free throws with one minute left in the game. Malachi Longworth was fouled and made both of them for a 65- 61 Cougar lead with 35 seconds left.

Cordia then scored to trail by 2. Devon Blair was fouled and missed the front end, but the Cougars’ Josh Profitt got the rebound and was fouled. He made both shots and the Cougars led 67-63.

Cordia answered with a trey and it was 67-66 with 6 seconds to go. Malachi Longworth was fouled and went to the line. He missed the first but he made the second for a 68-66 Cougar lead.

Zack Hurt got the ball as you knew he would, and drove for Cordia and drew the foul and everyone knew the game would go to overtime because Hurt seems to thrive on pressure. He calmly hit the first shot, but he missed the second and the Cougars held on as time ran out to win 68-67.

This was a big win for the Cougars over a very good team. Hurt end up with 23 points and Taylor got 20 for Cordia. The Cougars had balanced scoring led by Charlie Banks with 19. Devon Blair followed with 14. Malachi Longworth had a big game with 11. Eric Ison had 10 points off the bench and they all came in that big second quarter. Jordon Reynolds would finish with 7, and Josh Profitt was held to 5. Chase Adams also had 2 off the bench.

The Cougars had no time to enjoy this victory because they had to prepare for the best team in the region as the Crusaders of June Buchanan came calling on Saturday night. The Crusaders (14-3) were fresh off of winning the WYMT Classic and are looking to repeat as 14th Region champions, but the Crusaders were without one of their star guards, Tate Cox, who was out with an injury. Cox was the MVP of the Classic.

The Cougars shot out to a 5-0 lead and led 16-14 after a big 10- point effort from Charlie Banks in the first quarter. The Crusaders’ Clark Stepp would show fans why he is the region’s top player as he connected from about anywhere he wanted to. He poured in 32 points on the night.

The Cougars mounted a big lead by as much as 13 in the third quarter, but June Buchanan would not fold. Much as they did in the first meeting between the schools, the Crusaders fought back from a double digit deficit behind Stepp.

The Cougars led 51-50 with 2 minutes left, and that is when Stepp picked up a charging call and headed to the bench with his fifth foul. Charlie Banks scored inside and the Cougars led by three, 53-50.

June Buchanan got a trey by Hall to tie the score again. After Charlie Banks hit two free throws to give the Cougars the lead at 55-53, Clark Stepp’s little brother, Clint, took over and hit a trey. He gave the Crusaders the lead 56-55. The Cougars had held him scoreless until that point.

Devon Blair hit a big scoop shot for the Cougars to give the Cougars the lead back at 57-56. Clint Stepp connected on another trey as time was running out and it was 59-57 Crusaders.

The Cougars got the ball inside to Jordon Reynolds and he was fouled. He stepped up and hit both shots and can you say overtime? Well, that is what happened as the two teams were tied at 59 at the end of regulation.

This was a heartbreaker for the Cougars but you have to take your hat off to June Buchanan. The Crusaders never feel like they can lose and they showed why. After their leader fouled out, the rest of the team stepped up.

The Cougars were led by Charlie Banks with 21 points followed by Jordon Reynolds with 15. Devon Blair also reached double figures with 10. The Cougars placed all five starters in the scoring column, but they got no points off the bench.

This game got away from the Cougars, but they showed they can play with anyone in the region. Up next for the Cougars will be Larue County on the road on the 26th.