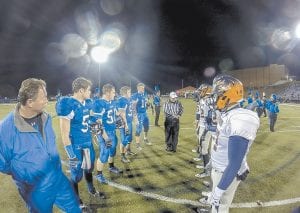 Above, players and coaches gathered for the coin toss before Letcher County Central’s game with Madison Southern. Below right, the Cougars’ defense was able to keep Southern’s Damian Harris, believed by many observers to be the nation’s top schoolboy runner, bottled up during the limited action he saw after returning from injury. LCC advances to play Pulaski County this Friday night. (Photos by Brandon Meyer/B. Meyer Images)

Letcher County Central’s running backs both outgained the nation’s top-rated runner to lead the Cougars to a 49-18 playoff win over Madison Southern. LCC will now host Pulaski County on Friday night at 7:30 as the state’s 5A playoffs continue.

The Cougars took control of last Friday’s game immediately when Hunter Hall took the opening kickoff 92 yards for a touchdown. The nation’s most highly recruited running back, Damian Harris, returned from injury for the Eagles, but was held to 62 yards on 10 carries in limited action.

The two best running backs on the field on this night were both Cougars in Hall and Jaylyn Williams. Hall had more than 400 yards of total offense and three touchdowns, including 196 yards on the ground on 22 carries. Williams had 224 yards on 20 rushes and three touchdowns. The Cougars’ ground game was so dominant they threw the ball only six times.

Madison Southern won the coin toss and elected to defer to the second half. Letcher Central senior Hunter Hall caught the opening kickoff at the LCC eightyard line, found a seam up the middle and then bounced it out to the right and took it to the house for a 92-yard touchdown. Zane Blair kicked the extra point to give the Cougars a 7-0 lead just 14 seconds into the contest. 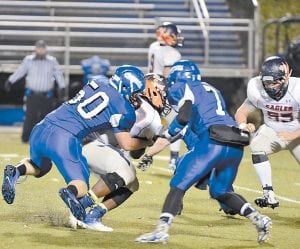 The Eagles returned the kickoff to their own 25-yard line, but Damian Harris did not play the first possession. Anthony Richardson came in motion and took the handoff and scampered 28 yards to move the ball into LCC territory. On second and 11, Hunter Hall blitzed from quarterback Aaron Slone’s blindside and caused a fumble that Madison Southern recovered for a 17-yard loss. The Eagles punted one play later.

On third and three, Williams gained five yards on a counter play to pick up the first down. Then quarterback Zane Blair dropped back to pass and eluded the pressure and ran for a 29-yard gain. LCC then put Williams in a wildcat formation and he took the shotgun snap on consecutive plays for gains of eight and nine yards. Now facing fourth-and-nine the Cougars decided to go for it. Blair threw a screen pass to Hunter Hall for a 13-yard gain to the one-yard line. Williams scored out of the wildcat formation and Blair’s point after increased LCC’s lead to 14-0 with 2:20 left in the first quarter. 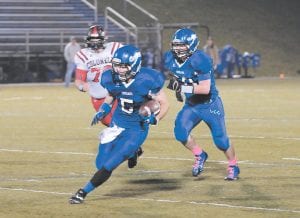 Running back Hunter Hall (5) was among the stars for LCC. (Photo by Chris Anderson)

Damian Harris, who has scholarship offers from Kentucky, Alabama, Ohio State and others, entered the game for the second series and gained five yards on his first carry. On the second play, Hall tackled Harris for a one-yard loss. Harris got stuffed on third down as well by Avery Stamper and a host of other Cougars and the Eagles were forced to punt again.

On the first play of the second quarter, receiver Tanner Lucas ran a double move and the defender had to pass interfere to save a touchdown. The 15-yard penalty moved the ball to the LCC 41 yard line. Blair threw a swing pass to Williams for a 15-yard gain. Then Hall burst up the middle for 12 yards. Two plays later Williams scored on a sweep play from eight yards out. The extra point made it 21-0 LCC with 9:15 left in the first half.

Payton Skidmore returned the Letcher Central kickoff 70 yards before barely being run down by Quade Adams. Still, the LCC defense stood strong and forced Garrison Watts to kick a 28-yard field goal to cut the lead to 21-3.

Madison Southern recovered a surprise onside kick, but the Eagles’ offense could not get a first down and punted.

Jaylyn Williams took a pitch from Blair for an 11-yard gain before Hunter Hall sprinted up the middle for a 67-yard gain and then scored a touchdown from one yard out on the next play. Blair successfully kicked his fourth consecutive extra point to make the score 28-3 in favor of LCC.

Madison Southern followed with its best drive of the first half. The Eagles used a play action pass play and Slone connected with tight end Andrew Miller who fumbled after getting hit just before crossing the goal line. The fumble rolled into the end zone where Letcher Central linebacker Avery Stamper recovered it to keep the halftime score at 28-3.

Richardson returned the second half kickoff 30 yards to near midfield. Slone used a play action fake to find Skidmore for a 15-yard gain. Then Harris gained 18 yards on his best run of the game. The drive culminated with an eightyard touchdown pass from Slone to tight end Austin Beetlestone. Williams ran in the two-point conversion to make the score 28-11.

After Letcher Central was quickly forced to punt on its first series of the second half, mo- mentum was suddenly swinging toward Madison Southern. However, LCC’s defense, led by seniors Jordan Boggs and Jacob Kiser, stuffed the run twice and forced an incomplete pass on third down to stem the tide.

After the punt, Williams gained 34 yards on the first play of the drive. Three plays later, on fourth and one, Williams took the handoff and juked a defender before sprinting for a 30-yard touchdown. The Blair extra point split the uprights to give the Cougars a 35-11 lead with 2:56 left in the third quarter.

On Madison Southern’s next possession, Stamper tackled Harris for a loss on second down and LCC’s defensive pressure forced Slone to intentionally ground the ball, forcing yet another Madison Southern punt.

Hunter Hall gained 10 yards via the ground on the first play of the fourth quarter. Then Williams ran around the right side of the line and dragged a defender on his back for a 20-yard pickup. Zane Blair then ran the ball on a quarterback keeper for a 13-yard touchdown. The score was 42-11 after the extra point was good.

After consecutive punts by both teams, the Eagles scored a touchdown on a 25-yard hookup from Slone to receiver Jared Simpson. The point after made the score 42-18.

Hunter Hall received the kickoff and had his second return touchdown of the game, this time from 88 yards away. Blair’s seventh straight extra point made the final score 49-18 in favor of the Cougars.

This was LCC’s most impressive victory of the Mike Holcomb era. The Cougars had 476 yards on the ground and simply physically whipped Madison Southern on both sides of the ball. Hunter Hall gained 196 yards on 22 carries, had two catches for 33 yards and had return yardage of 193 yards and three total touchdowns. The 422 yards of total offense is one of the greatest single game performances in LCC history. Even more impressive was to do that in the playoffs against a team with one of the best running backs in the country.

“We all played great,” said Hunter Hall. “It has been a great season thus far, but it isn’t over yet until we make it to Bowling Green.”

Bowling Green is the site of the KHSAA 5A State Championship game and shows the mindset that Coach Holcomb and the Cougars have that this one game is just a steppingstone to bigger and better things.

Jaylyn Williams had a phenomenal game as well, carrying the ball 20 times for 224 yards and three touchdowns. Zane Blair ran for 57 yards on the ground and a score. He completed four of six passes for 51 yards while directing an offense didn’t turn the ball over a single time.

With the true team victory, the Cougars are continuing to get better on a weekly basis which bodes well as this week the Cougars will host Pulaski County in the second round of the playoffs this Friday at 7:30 p.m. at Cougar field. The Maroons come in with a 9-2 record, but lost their last two regular season games after quarterback Riley Hall was lost for the season with an injury.