Cougars get back to winning ways 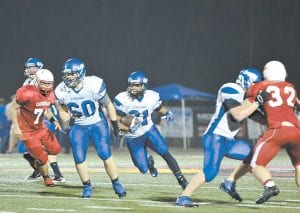 The Letcher County Central Cougars ended their two game losing streak with a resounding 47-6 victory over Sheldon Clark. The Cougars hope to improve on their 3-2 record at Somerset (0-5) Friday.

The Cougars looked sharp from the opening kickoff on their first road game of the 2014 season. The Cougars defense held Sheldon Clark star running back Brandon Butcher to just 32 yards on 11 carries. Butcher came into the game averaging 156 yards per game.

The Cardinals tried an onside kick to begin the game, which LCC recovered to give them great field position. On the second play Cougar senior running back Hunter Hall burst up the middle for a 46-yard touchdown run. The two-point conversion was unsuccessful to make the score 6-0 less than a minute into the contest.

The Cougar offense showed their quick strike ability when Zane Blair hooked up with Tanner Lucas on an 84-yard touchdown down the sideline to make it 12-0 in favor of LCC after the two point conversion failed.

Sheldon Clark responded with their only scoring drive of the game. The nine-play 52-yard drive culminated with a 10-yard touchdown run by Brandon Butcher. Hunter Hall broke up the two point conversion attempt to keep the score 12-6 right before the end of the first quarter.

After LCC first punt of the game, the Cougar defense stood strong and held Sheldon Clark to a three and out. Sophomore Preston Maggard recovered a block punt at the Cardinal 25-yard line to swing the momentum back in favor of Letcher Central which controlled the game from that point forward.

Hunter Hall scored his second touchdown of the game this time from five yards out and the twopoint conversion was good to increase the Cougar lead to 20-6.

Tanner Lucas intercepted a Harless pass in Sheldon Clark territory for the Cardinal offense’s second turnover of the half. On the next drive Josh Lee caught his first touchdown pass as a Cougar from Blair. The scoring play covered 14 yards and Jaylyn Williams took a shovel pass into the end zone for the two-point conversion to make the score 28-6.

Jacob Kiser led the LCC defense with two tackles for loss to force another Sheldon Clark on the next drive.

Jaylyn Williams had a 20-yard run off right tackle to move the ball into the red zone. Two plays later Williams scored from five yards out untouched after the LCC offensive line opened a huge hole. The score remained at 34-6 after the two-point conversion was no good.

The LCC offense quickly got the ball back after a punt. Blair found sophomore running back Quade Adams on a flare pass for a 25-yard gain. On the next play Williams took a pitch and scored from 11 yards out with 29 seconds left in the first half. The extra point was no good but the Cougars were in command up 40-6.

On the last play of the first half Josh Lee intercepted a pass and returned it 58 yards. It looked like Lee was going in for the score but he got tackled a yard short of the goal line.

With the score 40-6 a running clock was implemented at the start of the second half and the Cougars pulled most of their starters the rest of the game.

LCC received the second half kickoff and Quade Adams had runs of 13 and 10 yards to get into Sheldon Clark territory. The slow methodical drive took almost nine minutes off the clock but the Cougars turned the ball over in the red zone.

The Letcher Central defense forced yet another punt and started at the Cardinal 41-yard line after the kick.

Adams had run of three and eight yard to gain a first down. Then Preston Maggard ran 11 yards up the middle on a trap play to get to the one-yard line. On the next play Maggard had a rushing touchdown and Zane Blair’s extra point sailed through the uprights to make the score 47-6.

Tanner Lafferty had a 45-yard kickoff return but the Letcher Central defense forced a turnover on downs and the final score was 47-6 in favor of LCC.

This was the best performance on both sides of the ball of the Coach Mike Holcomb tenure at LCC. The Letcher Central defense only gave up one completion all night long and held Sheldon Clark to well under 100 yards of total offense. On offense Zane Blair completed five passes on seven attempts for 152 yards and two touchdowns. Jaylyn Williams had 93 yards rushing on nine attempts and two touchdowns. Hunter Hall finished with 69 yards rushing on six attempts and also had two touchdowns. Tanner Lucas had an 84-yard touchdown reception as Coach Holcomb continues to get all his playmakers touches throughout the game.

Kickoff for Friday’s game at Somerset is 7:30 p.m.