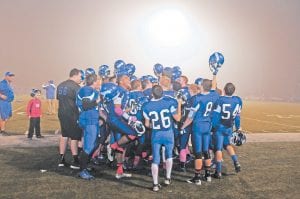 FRIDAY NIGHT (FOG) LIGHTS — As fog sets in over the Letcher Central football field, the Cougars celebrated their Friends of Coal Bowl victory over the Harlan County Black Bears. (Photo by Chris Anderson)

The Letcher County Central Cougars pulled off the most important win of Coach Mike Holcomb’s tenure by defeating Harlan County, 54-24, in the Friends of Coal Bowl to improve their record to 5-2, but more important 1-0 in district play.

The Cougars were impressive on both sides of the ball and controlled the entire game that was slightly marred by a fight midway through the third quarter. The officials, however, took control to keep the situation from getting too out of hand.

Zane Blair’s opening kickoff landed in the end zone for a touchback. On third and eight, Harlan County running back Dylan Cornett was stopped by Cougar linebacker Avery Stamper after a three-yard gain and the Black Bears were forced to punt.

LCC took over at its own 32-yard line. On second and 15 quarterback Zane Blair dropped back to pass, but no one came open so he scrambled up the middle for a 34-yard gain. Then on third and four, Blair hit Quade Adams on a seam route for an 18-yard gain. Tanner Lucas made a diving 24-yard catch to make it first and goal for the Cougars and on the next play Blair scored a one-yard touchdown. Blair made the extra point to give LCC a 7-0 lead with 6:29 to play in the first quarter. 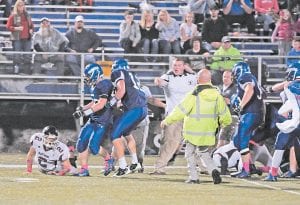 Letcher Central’s Jacob Kiser, pictured being held back by teammate Zane Blair, was among players ejected after tempers flared when a Harlan County defensive back slammed an LCC player to the ground. (Photo by Chris Anderson)

Cornett returned the kickoff 29 yards to the Black Bear 34-yard line. Running back Jake Ball gained 38 yards on a counter play around the left side of the line to get into LCC territory. On fourth and five at the LCC 19 yard line, Harlan County went for it and quarterback Jarett Ford was tackled by LCC defender Jaylyn Williams just short of the line to gain for a turnover on downs.

The Cougar offense could get nothing going and went three and out. Black Bear receiver Tyrese Simmons muffed the punt and a hustling Dakota Trotter recovered the ball for the Cougars. Jaylyn Williams ran up the middle for a 32-yard gain. Then facing fourth and 15 Blair threw a 36-yard touchdown pass to Hunter Hall on a wheel route out of the backfield. The extra point was blocked to keep the score at 13-0 with 9:37 left in the second quarter.

Harlan County started the next possession at its own 30-yard line. On third and six, Jake Ball carried a Cougar defender on his back to gain eight yards and a first down. Kyler Sturgill tackled Cornett for a five-yard loss. Then Harlan County ran a jet sweep play where Zane Blair caused a fumble with a huge hit on the ball carrier and Hunter Hall recovered the ball at the LCC 34-yard line. Two plays later Blair scored from 21 yards out on a quarterback draw play. The two-point conversion failed, but the Cougars had total command of the game and a 19-0 lead midway through the second quarter.

Blair kicked a touchback for the second time in the first half. On third and six Ford tucked the ball in and ran for a 21-yard gain. Then Simmons caught a flare pass on which Blair caused another fumble. Ford recovered the fumble way behind the line of scrimmage and the Black Bears were forced to punt once again.

After taking over near midfield, Hunter Hall used second effort to barely gain a first down on third and two. Blair gained 26 yards on another quarterback draw and on the next play scored a five-yard touchdown. Williams ran in the two-point conversion to make the score 27-0 LCC with under a minute left in the first half.

Harlan County quickly moved into LCC territory, but once in the red zone a bad snap was recovered by Cougar defensive lineman Jordan Boggs to keep the score 27- 0 heading into halftime.

The Cougars played flawlessly in the first half and were led by Zane Blair who had three rushing touchdowns and threw a 36-yard touchdown pass to Hunter Hall. Avery Stamper led the defense with eight tackles as the Cougar defense posted a first half shutout.

The Cougars received the second half kickoff and started at their own 35-yard line. Blair gained 20 yards on a run up the middle. Williams had consecutive runs gaining 10 and 16 yards to get to the Black Bear sixyard line, and two plays later Hall had a three-yard touchdown run. Blair ran in the two-point conversion to make the score 35-0.

A pass interference call against the Cougars gave Harlan County a first down. Ford completed a pass to Nick Cornett for a 24-yard gain to the LCC eight-yard line. On the next play, Dylan Cornett ran an end-around to the left side of the line. After a holding penalty on their first two-point conversion attempt, the Black Bears used a hook and ladder play where Cornett caught a pass on a hitch route and lateraled the football to Jake Ball, who scored the conversion to cut the lead to 35-6.

After LCC was forced to punt, the game got testy.

On a Harlan County running play the outside receiver blocked a Cougar defensive back well after the play and slammed him to the ground on the Black Bear sideline. A few Letcher Central players took exception to the act and a melee occurred and halted play for several minutes as officials tried to figure out what to do. Players from both teams were ejected and numerous unsportsmanlike conduct penalties on both teams cancelled each other out and finally play resumed. Jake Ball scored on a 40- yard touchdown run and the two point conversion made the score 35-16, and for the first time in the game Harlan County had seized momentum.

The Letcher Central offense then showed its quick strike ability. Blair completed a 49- yard pass to Tanner Lucas who burnt the defense on an out and up route. Then Jaylyn Williams busted up the middle for a 41-yard touchdown run. The score was 41-16 after the extra point was blocked.

Early in fourth quarter facing second and 15, Ford rolled to his left and connected with Jordy Boles for a 17-yard gain and first down. The six-play drive culminated with a nine-yard touchdown run by Ball. Ford ran in the two-point conversion to cut the lead to 41-24 with 10:07 left in the game.

Quade Adams returned the kickoff to the 39-yard line. After a seven-yard run by Hunter Hall, Williams took a pitch around the right side for a 54-yard touchdown. The two-point conversion failed, but LCC had a comfortable 47-24 lead.

The Cougar defense forced a turnover on downs and Jaylyn Williams had a 17-yard touchdown run. Blair’s extra point was good to make the final score 54-24 in favor of Letcher Central.

The Cougars simply manhandled Harlan County up front on both sides of the ball. The Cougars had seven rushing touchdowns on offense and controlled the line of scrimmage up front on defense as well. The win not only put the Cougars in excellent shape to contend for the district title, but the LCC senior class had never beaten rival Harlan County.

Zane Blair had nine rushing attempts for 109 yards and three touchdowns and completed seven passes on 15 attempts for 139 yards and a touchdown. Blair was named offensive player of the game. Jaylyn Williams carried the ball 12 times for 186 yards and three touchdowns. Hunter Hall had 42 yards rushing and 50 yards receiving and two touchdowns. Hall also had nine tackles and two fumble recoveries and was named defensive player of the game. Avery Stamper led the team in tackles with 12. Kyler Sturgill and Jordan Boggs each had six tackles apiece for the LCC defense.

LCC travels to Perry Central Friday to face the Commodores at 7:30 p.m.