The Cougars hosted the Engineers from Estill County in a big game on Dec. 27. The Engineers and coach Lawrence Tiller came in with a record of 3-5 with losses coming to Hazard (56-51) in Hazard in a very tight game but then they were blown out at home by Perry Central by 20.

The game stayed pretty close through the first two quarters as the Cougars led 16-13 after one, but they let the Engineers sneak back in the second quarter and the Engineers were able to take a 32-29 lead into the break as senior Tristan Cackling nailed a trey just before halftime.

Instead of hitting from long range, the Cougars pounded it inside and it showed as all five starters were in double figures. The Cougars used their patented strong third quarter to come back and take a 47-44 lead after three quarters and hit the clutch shots down the stretch to pull out the 70-57 victory and improve to 6- 1 on the season while the Engineers fell to 3-6.

Cackling led all scorers with 28 points for the Engineers. The Cougars were balanced in scoring with Charlie Banks leading the way with 19 points. He was followed by Cole Cornett with 12 as he had another big game and Josh Profitt, who also had 12. He hit two treys on the night. Devon Blair played solid at the point with 11 and Jordan Reynolds got 10 points down low as he always plays hard and gets it done inside.

The Cougars also got 4 from Eric Ison and 2 from James Gose. Ison has developed a pretty hook shot that no one in the region can stop and he needs to use it as often as he can.
Letcher Central 75
June Buchanan 58

It would be the new look Crusaders as several players have moved on or transferred including star player Tate Cox, who now suits up for Knott Central. Also gone are big gun Clark Stepp, who has taken his game to the next level after breaking every record he could at June Buchanan. But the Crusaders cupboard is not bare. They still have Clint Stepp (Clark’s younger brother) and big man Garrison Collins in the middle to form a good nucleus. The Crusaders are also without Coach Gary Stepp who has moved on and turned over the reins to former Crusader star Josh Cook. The Crusaders entered the game with a record of 5-3, while the Cougars were 4-1. 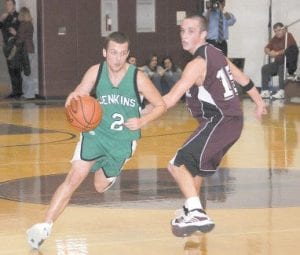 Brad Stanley of Jenkins dribbled around the Pikeville defense during the Cavs’ 82-35 loss in the opening round of the Pikeville Invitational Tournament over the weekend. The Cavs also lost to Paintsville 93-45, and Magoffin County 80-44. (Photo by Chris Anderson)

It is always exciting when these two meet and this night was no different. The Cougars opened with a flurry. Devon Blair stops and pops from 15. Cole Cornett steals and gets a lay-up and it’s quickly 4-0 Cougars. Then things started really heating up.

Josh Profitt connects on a trey and it is 7-2. After a block by Eric Ison on the defensive end, Ison would run the floor and connect on a hook inside and it was 9-4. 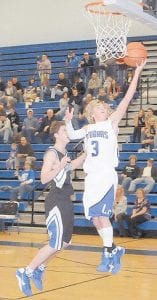 The Crusaders had no answer for the Cougar speed or for the Cougar guards. After a beautiful fast break lay-up by Cole Cornett, the Cougars got another trey but this came from Devon Blair just before the break and the Cougars went into halftime leading 39-21.

The third quarter would be much of the same. Profitt sneaked inside for his 20th point and a 41-23 Cougar lead. He later nailed two more treys for his eighth on the night and a commanding 62-36 lead for the Cougars. Charlie Banks was quiet most of the night on the offensive end, but he was a beast on the boards with 17 rebounds to go along with seven points. Devon Blair hit another trey for the Cougars and the benches emptied as the Cougars rolled 75-58 and improve to 5-1 while the Crusaders fell to 5-4.

It was all Cougars on this night as Josh Profitt and Devon Blair controlled the game. Profitt could have hit from the parking lot. Blair got his share of points as he tossed in 15, but it was Profitt’s night as he poured in 30 points. Other scorover ing saw Cole Cornett continue to play solid with 8 points followed by Jordan Reynolds with four, Brock had four and Roark got three and Ison and Johnson each had 2. This was a big win for the Cougars as they looked sharp on both ends of the court.

The Cougars were to travel to Belfry to play in the Mountain Schoolboy Classic Dec. 29 through Dec. 31.