Cougars have plenty to be proud of despite loss

The Elite Eight. Who would have thought that three years ago you could consolidate three Class A football teams with a combined record of 2-28 and three years later have a record of 11-1 and be playing among the final eight teams in Class 5A? And even more astonishing, be playing the Fort Thomas Highlands Bluebirds and their 16 state championships.

This team has more championships than some teams have playoff appearances. This team has eight Division One players. That is amazing!

We are lucky to have a Division One player in our region, but I think that is because they look at schools like Highlands first and usually forget about the schools in the mountains unless the player has eye-popping statistics.

Highlands is quick in every phase of the game and extremely strong. One of its players is a son of former Cincinnati Bengal Chris Collinsworth.

But let’s talk some more about our Cougars. They are winners of 11 in a row and were making the trip north to possibly move into the final four in the state with a victory. The Cougars left town last Friday on two chartered buses escorted by fire trucks and a huge procession of fans in vehicles decorated in their honor. 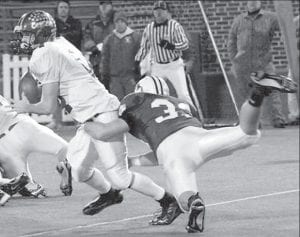 Junior quarterback Charlie Banks was nursing a hamstring injury, but that would not stop him playing. Banks has put up big numbers this season with 19 touchdowns through the air and 18 on the ground.

Highlands is led by Clay Cecil at quarterback and Josh Conner in the backfield. The Bluebirds had only given up 30 points in their last seven games, and had outscored their opponents 90-0 in the first two games in the playoffs. Most people thought the winner of this game would play for the title.

It was a long trip northern Kentucky (229 miles) on a cold night for football, but the Cougars were followed to Fort Thomas by a huge crowd, which makes the players feel good.

The Cougars opened the game on offense. They started at the 20-yard line, where senior Ben Fisher picked up a quick seven yards up the middle. Banks then moved the ball out past the 30 for a Cougar first down. Highlands woke up and got two straight tackles behind the line of scrimmage before Banks found sophomore McKenzie Smith out at the 42-yard line for another first down. Banks then found Stacy Phillips down on the Highlands 43-yard line for another first down and the Cougars were driving.

Banks started the Cougars’ next drive with a 13-yard pass to senior Dakota Brock. Letcher Central was then shut down by the Highlands defense, which was in the backfield almost before the ball was. The Cougars were forced to punt, but this time Highlands was all over it and came up with a huge block and the ball was at the Cougar 27- yard line.

The Highlands quarterback, Clay Cecil, picked up 16 yards on the ground and moved to the 11-yard line and forced a Cougar timeout. This didn’t faze Highlands as Cecil scored on the next play from 11 yards out to put the Bluebirds on the board. They would tack on a two-point conversion and lead 8-0 with 3:59 left in the first quarter.

The Highlands defense really took over as their massive line was just too strong and quick. But to be the best you have to play the best and that is what the Cougars did.

The Bluebirds forced another Cougar punt. This time it was a short punt and Highlands had great field position in Cougar territory. The Cougars showed some defense of their own as Dustin Brown picked off a pass by Cecil to give the Cougars the ball back. This was Highlands’ second turnover of the night. They had only four interceptions all year. This only made the Bluebirds mad as they forced the Cougars into a fourth-and-16 and another punt.

After Highlands started from its own 40, Conner moved to the Cougar 42-yard line. On the next play he took it 42 yards to the house to give the Bluebirds a 15- 0 lead at the end of the first quarter.

The Cougars played their hearts out but Highlands was just too big and too strong and quick. The Cougars turned the ball over on their drive on an interception that was returned to the Cougar 15-yard line. Conner again got the honors as he took it home again on the next play. The score was now 22-0.

The Cougars proved they wouldn’t quit as they took the kickoff out to the 48-yard line. Banks found Brock down on the Bluebird 45 with a pass. Junior Caleb Frazier (5’11” and 224 pounds) then rushed for four yards and a first down. Frazier caught a pass for another six yards to the 34-yard line. Banks then found Devon Johnson down on the 23-yard line. With some momentum, the drive continued.

Banks connected on three straight passes and moved the Cougars down to the Highlands 1-yard line, but a penalty moved it back to the 6-yard line and forced a fourth-and-6 for the Cougars. Banks then did what he has done all year – find the end zone from six yards out on a sore hamstring. The boys from the mountains had scored on mighty Highlands and the Bluebirds had given up their first touchdown of the playoffs. And this touchdown by the Cougars came against the Highlands starters.

Highlands eventually moved out to a 35-6 lead at the half, but the Cougars had proved something to themselves and to Highlands, which is something for the Cougars to build on for the future.

The Cougars scored late in the game against the Highlands subs as the clock ran continuously. Banks punched it in from two yards out to set up the final score of 52-12.

The dream was over for the Cougars. Highlands will probably be the state champion, but we will have to wait and see.

What the Cougars (11-2) were able to accomplish this season has made an community proud in the process. Scoring twice against Highlands and picking up 320 yards of offense is nothing to be ashamed of.

This season is just a steppingstone for what is to come. Building a program is like working a puzzle. The first pieces are now in place.

This year’s seniors will be sorely missed next season, but a new bunch of Cougars are on the way.

Congratulations, Cougars. You have made us proud.