Cougars hold on for win over Pike Co. 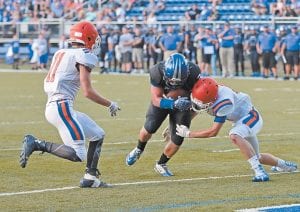 Letcher Central senior running back Quade Adams scored the Cougars’ first touchdown of the season in their 28-20 win last Friday. The Cougars will be on the road this week, and will face defending Class A state champion Pikeville in the Pike County Bowl on Saturday.

The Letcher County Central Cougars won their 2016 season opening game by a final score of 28-20 after a dramatic goal line stand as time expired. Pike County Central was stuffed twice from the two-yard line by the LCC defense in the final 30 seconds of the contest. Without any timeouts remaining, the clock ran out before the Hawks could run another play to give new head coach Junior Matthews his first win as Cougar head coach.

Avery Stamper returned the opening kickoff for LCC to their own 47-yard line. On 3rd and 4 Cougar running back Preston Maggard gained five yards up the middle for the first down. Then on 2nd and 14 quarterback Nicholas Sergent rolled to the left and found Blake Brashears for a 22-yard gain. Two plays later Quade Adams scooped up a fumble and scored a touchdown from four yards out. The two-point conversion was no good but LCC had taken a 6-0 lead with 9:22 left in the first quarter.

After back-to-back three and outs by both teams, Pike Central running back Austin Mullins gained 24 yards on a sweep around the right side of the line. Then quarterback Seth Conn scrambled for a 12-yard gain to get deep into LCC territory. Cougar defender Tannar Lucas broke up a pass in the end zone on 3rd down. Then on fourth down Alec Fields sacked Conn for an eight-yard loss and a turnover on downs. 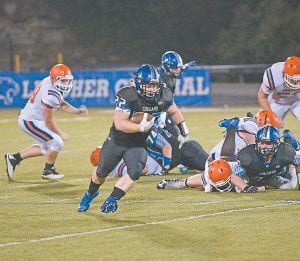 Sergent connected with Lucas for a 19-yard gain on first down, then threw an out route to Adams for 13 yards just across midfield. The next play Lucas ran a stop route, caught the pass and cut in between three defenders and raced in for a 48-yard touchdown. Brashears caught the Sergent pass in the back of the end zone for the two-point conversion, increasing the LCC lead to 14-0. Sergent went 3-3 on the drive for 80 yards and a touchdown.

The Hawks started at the LCC 41-yard line after a personal foul penalty on the kickoff by the Cougars. On fourth down Conn got flushed from the pocket and found receiver Stone Harris for a 35-yard touchdown. The extra point was no good but PCC had cut the lead to 14-6 with 22.5 seconds left in the first quarter.

With the Cougars driving, cornerback Conn stripped the ball from the LCC ball carrier and returned it 76 yards down the sideline for a touchdown. Conn completed a pass to Dylan Coleman for a two-point conversion and just like that the score was tied at 14.

Gage Isaacs returned the kickoff 25-yards to the LCC 36-yard line. On 4th and 2 Sergent used a pump to find Lucas open who ran an out and up for a 30-yard gain. Three plays later the fourth down pass was incomplete for a turnover on downs.

Pike Central used a 13-play 73-yard drive to chew up the clock and score with 20 seconds left in the first half. The Conn touchdown run gave the visiting Hawks a 20-14 halftime lead after the extra point was blocked.

Conn separated his nonthrowing should late in the first half and would not be able to play the rest of the game. Pike Central never attempted a pass the entire second half allowing the LCC defense to stack the line of scrimmage to stop the run and subsequently not allow the Hawks to score after halftime.

The Cougars tried an unsuccessful onside kick to start the second half giving PCC great field position. On 4th and 2, Mullins gained five yards to get to the LCC 31-yard line. LCC linebacker Christian Broderdorp then tackled the ball carrier for a six-yard loss. On the next play a botched handoff was recovered by Cougar senior Tyler Isaac to stop the scoring threat.

Maggard took a handoff up the middle and bounced off a tackler for a 26-yard gain. Facing 3rd and 2, Maggard got the handoff and got the first down by bouncing the run off the right side of the line. Two plays later Maggard scored from one yard out. Damen Holbrook split the uprights with the extra point and LCC retook the lead 21-20 with 7:58 left in the third quarter.

On3rdand8abadshotgun snap by Pike Central was recovered by Broderdorp at the LCC 46-yard line.

After a holding penalty on LCC, Adams had an 11-yard run on a sweep to make it 4th and 5. The Cougars went for it and Sergent found Stamper on a 15- yard crossing route to extend the drive. LCC eventually turned the ball over on downs inside the PCC 20-yard line.

The Letcher Central defense immediately got the ball back for the offense, when Broderdorp recovered another fumble at the four-yard line. After a false start penalty, Sergent scramble for a nine-yard touchdown run. The Holbrook point after gave LCC a 28-20 lead almost midway through the fourth quarter.

Noah Brock’s tackle for loss on third down forced a PCC punt.

The Cougar offense bogged down giving Pike Central one last chance to tie the game. PCC quickly moved the ball down the field calling a timeout from the two yard line with just over 30 seconds left. LCC stuffed Mullins on the run up the middle and with the clock running the Hawks rushed back to the line to try and get one more play off. Tyler Hunt took the snap and kept it on a quarterback keeper but was met by a host of Cougar defenders who tackled him and preserved the victory in dramatic fashion.

Letcher Central used a balanced offensive attack to start the Junior Matthews coaching era off with a victory. Nicholas Sergent completed 12 passes on 20 attempts for 187 yards and a touchdown passing and a rushing touchdown. Preston Maggard gained 104 yards on 17 carries and had a one-yard touchdown. Tannar Lucas caught four passes for 108 yards and a long touchdown. Quade Adams had 20 yards rushing and 41 yards receiving on six catches and scored on a fumble recovery. Blake Brashears gained 30 yards on two receptions.

The defense was led by senior Avery Stamper who was all over the field and collected 17 tackles. Christian Broderdorp had two fumble recoveries. Kylar Sturgill had nine tackles. Noah Brock led the lineman with eight tackles. Tyler Isaac made seven tackles and had an important fumble recovery.

The Cougars will try to improve to 2-0 this Saturday in the Pike County Bowl against defending state champion Pikeville. Kickoff is scheduled for 8:30 p.m.